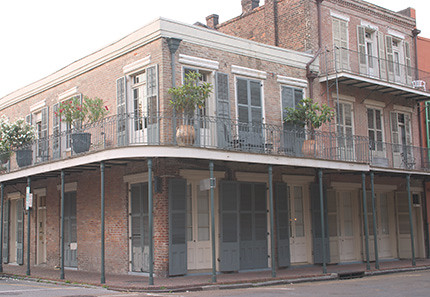 This was an early morning shot, taken in the French Quarter, before the flood.

I’ve decided that my New Orleans, “straight” series will be titled “Before the Flood” because I was lucky enough to be able to see the city, in all it’s glory, before the hurricane hit, the flood waters rose, and all Hell broke loose.

The Hyde Park Bar and Grill show went up this Sunday. It wasn’t too eventful, other than Kathy and I each got 7 pieces in the show. We ended up getting “our own room” since our work goes really well together. She gave us a night, light, bright room that I think really showcases the work quite well, so I’m quite happy about it all. It was very tiring to get all that work together in such a short time though. Even one of the other artists in the show commented that, “we didn’t have much time from the time she called us, until the time we had to drop off and hang the work.” You got that right.

The show features some folks who are refugees from New Orleans, as well as some folks that produce artwork “inspirted” by the City. One of the refugees had to borrow framing material to be in the show.

It’s hard enough selecting pieces, printing, matting and framing for a show. I could hardly imagine having to do that with no home, in a strange city, without the proper materials. I really feel for those folks.

I also feel like I’m the one who really “won out” on that deal, since I get to see the resulting work, and enjoy it. It’s really great for me to see the work of somebody from New Orleans who might not have done a show in Austin, if it weren’t for the storm. I know that sounds selfish but, frankly, I’m very happy that I got to experience the work.

It’s almost like traveling somewhere, only getting to stay put. I don’t have to move, yet this wonderful artwork was brought here, to me, for me to enjoy.

Maybe next time the high water will spare the frames too.