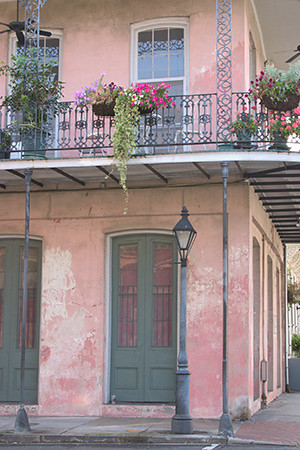 This building looks so pretty to me, with the soft colors and the crumbling facade of a pink wall. This is one of the few balconies that I look at and think, “wow, I could sit right there and really enjoy watching the world go by.” Folks, now *this* is what I call a porch.

Speaking of worldly knowledge and all, did you know that Charles Manson and the Manson family “clan” killed not only the actress Sharon Tate but the daughter of the Folger’s Coffee clan?

It’s true. I guess all I can really say about this is that there are advantages to having a murderous TiVo. Ask me, I know. (Like I’ve said before, “if it involves death, bloodshed, dismemberment, anarchy or other mayhem, my TiVo’s all over it.” Thanks to my preference for Law and Order reruns and the like, it now has a mind of it’s own and is, somehow, plotting the perfect murder, seemingly without my knowledge or assistance.)

Speaking of TiVo, in a possibly foolish attempt at re-programming mine, I’ve set it up to start recording only movies that star Nicolas Cage. Don’t ask me why, I can’t really explain it, I just thought that it would be a nice change of pace. He does have some movies with murder in the plot so, lucky for me, TiVo’s there when I need it, and I now have a few things to watch this weekend.

That is, if I could finally get off my duff and finish matting and framing all the artwork I need to have finished before Sunday. I did two and a “half” pieces last night. (The half was that I actually cut a mat and did not finish assembling the frame for a piece.)

And, finally, to tie all of this in together, I believe that Nicolas Cage actually lives in New Orleans or, perhaps, did at one point. When we were taking the “home and garden” tour, the nice lady told us that he purchased a home from Trent Reznor (maybe it was Nicolas Cage, I really don’t remember the name-it was hot that day and the nice lady had a red umbrella, which was really distracting me, because I so wanted to take a damn picture of it. What is it about umbrellas that make them so photogenic?)

I actually got a rather nice, although spooky looking, shot of the home in question despite not knowing for sure who ownes it, having purchased it from “rock star hunkerly dude man himself,” Trent Reznor. (I sooo used to have the hots for “my man” Trent, before my friend Debbie told me that he’s addicted to smack, is about five feet two in heels, and stinks to high heavens, since he doesn’t bath regularly on account of his heroin habit. That and, he used to have regular run-ins with the, ahem, “good” folks at the Travis County Sherif’s office, possibly on account of the smack and all. Go figure.)

Maybe Nicolas Cage has some really interesting shelves beneath his sinks and hidden along his baseboards?

(Nicolas, or whoever you are, if you’re reading this, out in wala wala internet land, go check and report back to me ok? I promise I’ll take only half the profits from the smack re-sale and, if you want, we can donate them to hurricane relief efforts. It would be easier, methinks, than matting and framing seven pictures before Sunday. Oh and, don’t worry. None of them are pictures of your house.)