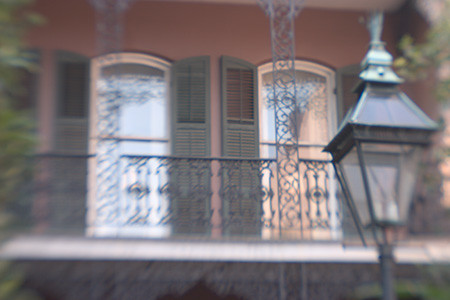 This is a shot taken from my latest series, the “straight” New Orleans series. These are mostly lensbabies, but some “straight” photography thrown in for good measure. Don’t worry, they don’t get to “crisp” on you, most of this straight stuff was taken from a moving vehicle or I’ve otherwise managed to blur in up in the usual way.

I’m going to try to post and run each of my uploaded series in order, so that I don’t lose what’s left of my mind, and so that you get to see a sort of “trail of images” rather than make it more haphazzard. We’ll see if this works and how long I’ll be able to stick to the plan.

This weekend was very busy. I’m getting ready for an upcoming show at the Hyde Park Bar and Grill. The show is a benefit for hurricane victims and will go up this Sunday, October 9th. For those of you keeping track of this sort of thing, I have another show running at the AVAA gallery through October 27th so, yes, it’s been a busy month, with a lot of artwork going up in a lot of different places. It’s all good though.

The Hyde Park Bar and Grill show is expecting 6-8 framed pieces so I spent this weekend printing away. I still have a lot of matting and framing to do. I’m not as organized and efficient as some folks, and I really don’t like to print at nighttime because I can’t see the results quite as well and fear I’m more likely make a mistake. I got all of the stuff printed this weekend, in the daylight hours, but didn’t really put a dent in the framing.

I don’t usually like to frame after work, since it’s a boring task but, this week anyway, I’m forced into framing mode. I still have a few days, so current plans are to do a few each day until it’s finished. I don’t want to kill myself doing the show, but I don’t want to be crazed at the last minute either. Part of me is tempted to just put up the coffee pot tonight, stay up late, and finish them all off, just so I can be done with it.

We’ll see how I feel after work, when I get home and am confronted with the option of sitting down, feet up, cold drink in hand or framing. Something tells me that I’m going to be chanting, “Iced tea, anyone?” rather than spending time in the little dark room, on my knees, with the knives and the power tools. (Call it a hunch, ok?)

I’ve started booking the Venice trip and am quite excited about it. We figured out this weekend that I will be gone for Thanksgiving and all surrounding weekends, but Mom’s really ok with it. I think she realizes that it’s a great trip, an adventure, and will be a lot of fun for me. She’d rather see me travel and do what I really want, instead of spending what she considers to be “just another day” with her. I’m sure we’ll celebrate Thanksgiving in our own little way, somehow, either before or after I leave. Nobody in my family really likes turkey anyway, so it’ll be ok.

Ellen has not gotten her iPod nano yet, but she’s received several boxes, each with another piece of the puzzle. So far, I believe, she’s gotten the dock, the cord, and the power adapter. She told me this weekend that, “this is like the gift that keeps on giving. Every day brings another box.”

Who knew that iPods were like weeds of the technological grass. They keep popping up all over the place, you can’t really seed them, and they sort of just fly off into the wind when you least expect it, not to mention they are cute in their own little dorky way. (And oh how we love to tug them so.)

It still beats a CD player no matter how you slice it.