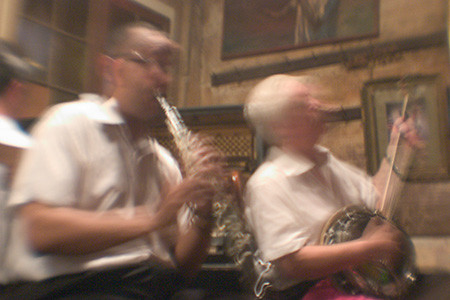 This image looks quite like yesterday’s, except that, in this one, the banjo player has his head tilted up and looks a bit cheerier. I think this makes for a better image, despite the fact that nothing much about the past few days has been “cheery.”

For starters, yesterday, around 3 pm, we got word that one of my co-workers was killed in a motorcycle accident, on his way to work. He had purchased a new BMW motorcycle about a week ago. The police say that, around 6:30 in the morning, in far south Austin, he lost control of the bike, crashed, was thrown, and that the bike caught fire. He is survived by a wife and two adopted children.

I will remember him as a very happy, helpful fellow who always had a smile on his face. He was a bit older than the “high-tech” norm (of, say 32 and a half, which is the age, approximately, at which computer programmers “peak” if I had to guess) but he was in good shape, used to enjoy hiking, biking, photography, and a bunch of other activities. He was active, vibrant, and happy and will, most certainly, be missed around the hallways of the building.

I finally managed to go grocery shopping last night to get some butter. It seems rather pointless to mention this now, doesn’t it?

Like, in the grand scheme of things, does the damn butter really matter all that much?