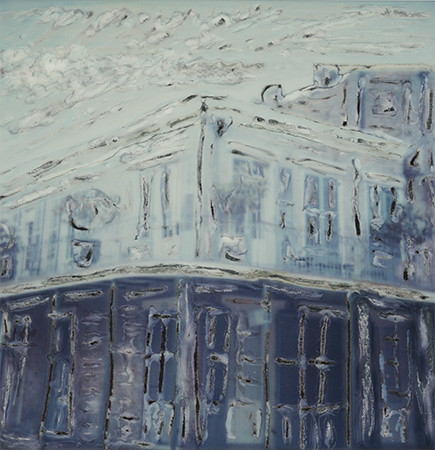 This is an interesting image. It’s interesting to me because I made a mistake when it first came out, and was able to “fix” it in Photoshop. You’d never know it but the sky is severely “clone stamped” in this image. I think I did a good job. You can hardly see my band-aid, clone stamp, and Gaussian blur touch-ups. Well, it just looks like a regular ole’ “mushed” Polaroid to me now. (It makes me happy that you cannot really tell where I flubbed it up and how I fixed it up.)

I also think it’s really interesting how the digital realm is making me want to do Polaroids more. You would think that I would completely abandon the land of film but, somehow, the Polaroids aren’t easy to walk away from. The digital universe makes them even more appealing to me, since I am able to “touch up” what, before Photoshop anyway, would have been lost. This “second life” of the Polaroid makes me want to shoot them even more. I owe a lot to Kathy as well, who gave me the remarkably simple yet brilliant idea of taking my digital images, printing them cheaply (non-archivally) and then taking Polaroids of the pictures. It works like a charm. It means too that I don’t have to lug around my Polaroid camera and film-that I can go out into the world with only one camera, shoot until my heart’s content, and then come back and “do” Polaroids while held up in my house because of the heat. (It’s been 108 degrees in Austin lately-almost even too hot to do Polaroids indoors.)

It’s a funny thing too how I seem to keep reliving my trip to New Orleans. In actuality, I was there for only about 5 days but, between the hurricane and the Polaroids, I feel like I’ve never left.

I can only imagine what Venice is going to be like. Best part, if it’s half as fun as New Orleans, and my Polaroid scheme “works,” I’ll be able to re-live it well into next summer (at the rate I do Polaroids, anyway.)