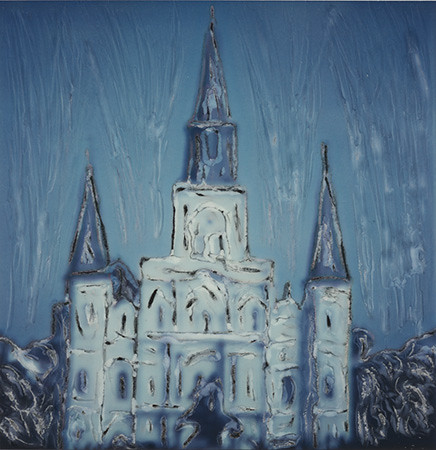 This image was shot almost exactly where the President stood when he addressed the nation regarding Hurricane Katrina. It’s a manipulated Polaroid print taken from a still photo I had taken while visiting, obviously before the flood.

A lot of folks are talking now about FEMA, the flood, the hurricanes, and the heat. I think it’s a good thing that people are coming together to try to do something about the issues that were raised, and maybe try to actually fix some of the underlying problems (like poverty and tensions between the races) that lead to the disaster and poor response for Katrina. I read in the news yesterday that the head of police for the City of New Orleans had resigned recently. Maybe the corruption and graft can finally be addressed as well as some of the poverty and race issues.

Let’s face it, we share one world-there’s only one planet we can live on (so far.) It pays if we all try to get along. There will always be those who steal or try to declare themselves king of something. We need to stand firm, remind ourselves that these folks are, in fact, our neighbors, and that, if for nothig more than selfish reasons, the next big natural disaster could hit us, leaving us stranded, surviving thanks only to help from a neighbor. How does that old saying go “there but for the grace of God go I.” Let’s do something now to fix things, make things right, so that, in the future, we don’t have to suffer.

I got word yesterday that there is a restaurant in town looking for “photographs of New Orleans” for an art show, with procedes benefiting the Red Cross.