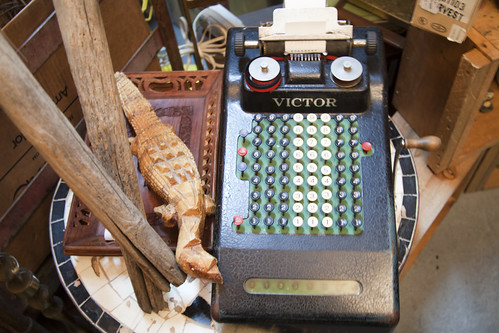 Some of you out there might know my mother. She’s retired now but back in her day (as she would say) she used to work one of these things. This beast is something called a “Victor adding machine” and was used as a precursor to the modern day calculator (and, I’d have to guess, computer too, since now we use those really instead of calculators.)

For those of you young enough out there to not know what an “adding machine” is (or was) and don’t really have a frame of reference, it was a calculator-like device that they used in offices to do tasks like add items for payroll, add items for accountants, and the like. Almost any office that handled money (even if that money really boiled down to their very own payroll system) had one of these beasts.

Along with the adding machine came, of course, the machine’s operator. Adding machine operators were sort of like primitive computer programmers of their day. They didn’t do quite the calculations that a programmer would perform, but they worked with the machine. They sat at the machine churning out numbers and, quite literally “crunching numbers” on a device that looked much like this. It worked like this, “tap, tap, crunch” as the machines coils turned, the numbers registered, and the tape printed out yet another summation. The machine itself had numbers and allowed you to add, displaying the results on a paper tape that could then be attached to a legal form or included in a file. (When I say “file” here I mean an actual “file” not the items on our desktop computers, which are also “files” but aren’t really any physical files. Think “things that fill up a file cabinet” here and you are in business.) These machines also had a crank on the side and were operated often by somebody who doubled as what they called (back then anyway) a “statistical typist.” That’s pretty much what my Mom did back in her day-she was a statistical typist who, more often than not, spent her days toiling away at one of these beastly machines, as a way of adding numbers for companies in downtown New York City.

Adding machines are now pretty much found only in the dark hovels of antique stores. I’m guessing here, but probably most folks don’t even know what one is, or would recognize one if they happened upon one (although, I do think you could probably figure it out if you gazed at the thing long enough-it’s not all that complex by today’s standards.) Oddly enough (or maybe not!) they still do sell these Victor adding machines on eBay. (I guess maybe it isn’t all that odd, since they sell basically everything on eBay these days, but there sitting quietly among the “everything else” are some of these beasts, now available for resale if you so desire.)

So, there you have it. My mother, the antique, used to use one of these antiques to do bookkeeping-like tasks at a desk in downtown New York City back before I was born. Strange world we have, strange how far we’ve come, in that this type of device really isn’t even recognized anymore. It’s all, as they say, been replaced by computers, and now maybe even tablets. Going now too are the days when people used keyboards to interface with computers (soon too that will be a thing of the past, just like this beast. Google glass, anyone?)

Oh, and in case it’s not obvious from the photo, if they ever do drop an atomic bomb on New York, any adding machines that are possibly left in any dark, dank office storage caves will probably survive to add another day. These things, or so Mother tells me, “were quite built like tanks.” She also tells me they were heavy as lead, so that ought to make you feel a bit happier about lugging around a now-what-seems-so heavy laptop (even if you don’t have a solid state drive!) Try fitting this into a backpack, you hipsters! (Hint: it won’t!)

Gone are the ways of the adding machine. Gone are the calculators. Soon to be gone are the keyboards. The more things change, the more they stay the same. (Or so Mother tells me.) Each and every day, the great adding machine of life “tap, tap, crunches” out a new piece of tape for us to digest. What slice of life will you feast upon tomorrow? Only the Victor knows for sure, I’d guess, only the Victor knows for sure. (Tap, tap, crunch.)