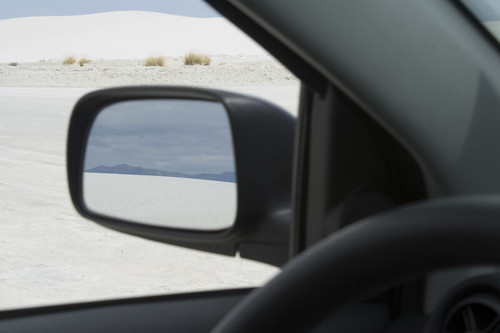 “Yes, yes, I do,” I replied. “It’s probably the same one too. Just migrated south for the season and was all happy to see me again. ‘Look! Here she is. She’s back and I love her-let’s cling!’ Oh great. I have a stalker tumbleweed.” (Of course, that’s probably what Nicolas Cage might say about this point, but, hey, at least now I know how it feels. It’s never too late to spread the love and all.)

El Paso drivers are insane, but you can get drunk as hell on margaritas in the airport, while waiting for your plane, which has been delayed for hours. Not like I would know or anything (Ok, so maybe I would.)

My rental car was that marvel of Korean engineering-the Hyundai Elantra. What a rice eating bucket of bolts if I ever drove one. (The oil light came on in less than 100 miles.) It almost made my “luxuriuos” Crapanese hatchback seem posh and sturdy. (Hey, I do have a sliding tray/cup holder thing. That’s the “luxury,” now stop playing with it before you break it.)

The rental car company gave me no less than 6 (count ’em, 6!) keys too, by the way. I don’t know why, seeing as nobody in their right mind would actually want one of these Korean crap buckets but, hey, I had no less than six keys to protect me from those big, bad, wild free roaming Korean crap car thieves. (Get away! Go get your own crap bucket wtih an oil light that comes on in less than 100 miles. This one’s locked. Harumph!)

At one point, on the way to the dunes, I got lost and thought, “Hmm. I don’t really know which state I’m in, New Mexico or Texas.” (I know this is hard for my European readers, who routinely pass through no less than sixteen countries for nothing more than a good latte but, believe me, Texas is BIG and hard to drive out of on a good day. Think of it as a sort of southern US mental asylum-they don’t let us out easily.) Then, I saw a sign that read, “Slow Border Checkpoint Ahead” and I thought, “Oh just ducky. Nevermind the state, I don’t know which country I’m in anymore.” Juarez is not all that far away and it suddenly felt a whole lot closer, let me tell you. (By the way, I think it was actually New Mexico, north of the border, but, at this point, your guess might be as good as mine. Parts of El Paso are indistinguishable from Juarez and New Mexico looks a lot like old Mexico-hence the name.)

The rental car survived the trip ’round the border and made it to the Sands, by the pretty glow of the oil light, and I survived the trip back into the dunes. I had to parallel park that thing next to a giant sand dune (pictures to follow) too, which is no easy feat, not even for this New Yorker. Them dunes are bigger than Tonka Trucks, trust me.

Speaking of the dunes, they have odd traffic signs there. They have signs that say things like, “Slow Congested Area.” Yeah right, and monkeys fly out of my butt. Reality check folks! There’s nothing there but sand, sand, and, just in case you do get bored, lots more sand. Sand that sticks to your shoes, sand that gets into your eyes, sand that gets into crevices you’d rather not mention in mixed company. Everything is just either covered in sand, about to be covered in sand, or a tumbleweed thats blows across, you guessed it, sand covered landscapes (long enough to hug me and cling to my front bumper anyway.)

Driving across the dunes themselves is smooth. It looks like snow, it feels like snow but it’s not cold and not slippery to drive across. It’s actually smooth and easy to drive on, though it does sort of “kick up” a bit, almost like loose gravel. You leave a trail of small white pebbles in your wake but can drive quite comfortably across the White Sands.

All this and I’m happy to report the oil light finally stopped glowing, just in time for me to return the Korean crap bucket and wait hours (getting drunk) for my flight back to Austin. I did manage to sneak a couple of drive-by night shots (pictures to follow) including possibly my favorite of the trip-a shot taken after dusk, with the sand dunes lit only by my headlights and the moonlight glowing. (We enjoyed a full moon and actually got to shoot a little in the moonlight glow, which is quite eerie. Again, pictures to follow.)

All in all, it was a wonderful trip, though I’d hardly recommend a Hyundai, unless, of course, you are a paranoid driver who demands six keys and loves to bask in the glow of a “your engine needs attention” diagnostic light.