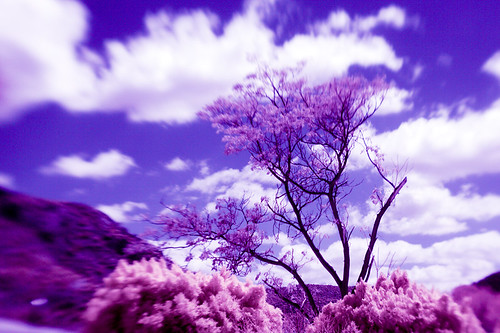 Yes, yes, yes, I know I’m behind on blogging. What’s a poor girl to do? Well, a Sunday round-up for starters, that ought to get things going.

This weekend, I went down to Houston to catch the tail end of Photofest. I’ll probably give you more detailed highlights at some point, but the “quick hits” are that we saw an absolutely fab show by a Japanese photographer at the Museum of Fine Arts Houston, called Elevator Girls. After that, we hit a bunch of galleries and spaces (8 I think was the final tally) including gallery row, where the famed Watermark Gallery was…closed. Those bastards. (This was Kathy’s second trip to the ‘fest and both times, Watermark was….closed. Bastards, I tell you. Rat Bastards.)

Kathy drove with her new GPS navigation system (blogger fodder alert!) Here’s a teaser, “well, there’s something coming up on the right…it’s either a church or a toilet. What’s that? Oh! It’s a gas station. Right. That makes sense if you turn it this way…” Oh the humanity! With the bong sound from the nearest college still ringing in my ears, I can tell you that I’ve finally started to pull some pink trees from the bowels of the infrared camera.

Speaking of cameras, mine now each have a name. The converted one is to be called “pinky” (due to its penchant for turning the world pink, based, of course, on heat content or, um, thermonuclear meltdown, whichever is more convenient) and the “normal” one is now called “dark star” due to it being the first all black camera I have actually owned. Yes, yes, I know. How boring is it that I have to name them and aren’t they overworked enough already without me having to add to it? Just be glad I don’t name the Compact Flash, that’s all I can say in my defense.

I’m readying for yet another portfolio review (to happen on the 14th of this month) and still uploading the stash of flash from Santa Fe (and now, I guess Houston.)

We visited the art car museum in Houston and I picked up a few (large-blogger fodder alert!) books, including Nocturnes by Michael Kenna and a $15 Brassai book that was on sale but deadly to old ladies in restrooms, young children, and the handles on the plastic bag I tried to use to transport it. “Art so big, it’ll kill ya. Or, you know, at least take out your big toe.”