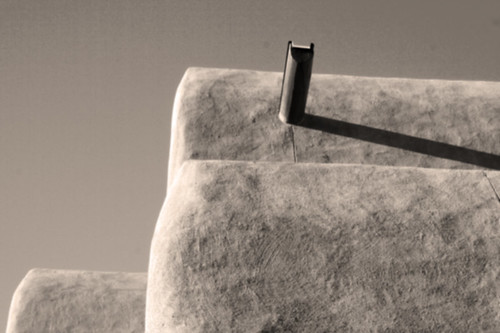 AdobeSpigotSepia, originally uploaded by carolWorldLeader.
Ok, I’m back once again from yet another trip and I’ve decided to post my top 10 list from Santa Fe, NM. Now, this time, I’ve been to Santa Fe before, so some of the maybe more obvious things are not going to make the final “top 10” selection.

Number 10: There’s a place called Jackalope that’s absolutely fabulous for taking pictures. It was described to me as a “junkyard” but it’s actually more like a place where you can buy “jonque” for your yard. Texas needs a Jackalope. Austin needs a Jackalope. The world needs more Jackalopes. I could be left stranded in Jackalope with an infinite supply of Compact Flash, never bother to leave, and end up inventing an entire “Jackalopian” art movement. (Well, ok, not really true-let’s see you try to find me an “infinite supply of Compact Flash.” Good luck with that.) But, hey, all fiction aside…you get the idea. Jackalope. It’s the best junk outside of the junkyard you’ll ever want to find.

Number 9: The Santa Fe Photo Workshops have a disproportionate number of National Geographic photographers teaching classes and workshops in their facility.

If it’s true that the world is balanced, and that matter, anti-matter, and all that add up to be equal, this must mean that, somewhere, maybe like in China or something, there’s a lot of stuff not getting photographed right now. Everybody’s shooting it up in Santa Fe.

Number 8: They have tumbleweeds there.

As I was driving into the City, along a few lonesome stretches of highway, I found myself suddenly attacked by tumbling tumbleweeds. It’s a scary thing-or, at least, it would be, had I not quickly realized that, if you hit them with your car, they just sort of erupt into a stream of hay. Even so, doing 75 on those State highways, while being pelted with weeds is kind of a scary concept for this New Yorker.

Number 7: They have hoodoos in the desert outside of Santa Fe. Giant rocks that stick up like fingers pepper the landscape. And, they look fake, let me tell you. I kept saying, to whomever was in my car, that I expected somebody to yell, “CUT!” pull a great big curtain back, and reveal a flat road behind the view, like we had been stranded on a Hollywood backlot or something. Everybody riding with me just kept repeating, “oh, that’s right. You’re from Texas.”

Number 6: Even though the food is really, really, really good in Santa Fe, and you eat something approaching five meals a day there, plan on dropping ten pounds each visit.

It’s true, my snowflakes. Everytime I go there, I eat and eat and eat and I don’t gain any weight, in fact, I usually drop some. I’d say that I need to move there except that, at that rate, I’d disappear (well, ok, maybe in 12 years or so.) Let’s just say I could really stand to live there for about six weeks and leave it at that, ok?

Number 5: Santa Fe is extra friendly towards photographers. I had people stop many times, not wanting to walk in front of my picture before, that’s nothing. In Santa Fe, I had people stop driving, since they didn’t want to drive in front of my picture. I even had one guy offer to drive around the block for me a few time, in order to make nice pretty “light trails” while I was shooting at night. Wow. What a photographer friendly place.

Number 4: You can get the best cup of tea I’ve had in the United States at a placed called “The Tea House” on Canyon Road. Rivals London, really.

Number 3: The desert is dry. Now, this may seem rather obvious to some of you, but it really sneaks up on you when you are out there. You really must “en-goop-ify” every chance you get-I’m talking some serious “goop” here too-Chap Stick, moisturizer, hair conditioner-just head-to-toe engoopification is a must in that climate. Trust me.

Number 2: You can get some of the best tapas (Spanish food) at a place called El Farol. The NY Times called it the best Spanish restaurant in the US. I was hesistant at first but, man, really the best tapas I’ve had outside of Europe. Dang. Incredible place. Anybody going to Santa Fe who likes tapas, wants to try tapas, thinks they might like to try tapas, or just really misses Barcelona, must go visit El Farol (not to mention it’s like my name only with an “F.” How cool is that?)

The high road to Taos is a spiritual journey. Even though it takes you through God’s country-I kept thinking it would be great if the guys from Top Gear came around one of those hairpin curves in a ‘Lambo, doing something like 110 in the shade-it’s really as close to God as you can get in New Mexico. At one point, tall trees line the road and all you can see in front of you are the Rocky Mountains. At another point, you pass a spanish mission style church. At yet another, you drive by a mural painted with UFO’s and aliens. It’s quintessential Santa Fe in oh so many ways.

For those going to Santa Fe, enjoy the trip. For those wishing they could take the journey, watch for pictures from Santa Fe in the coming weeks, or monitor Flickr for more instant updates.