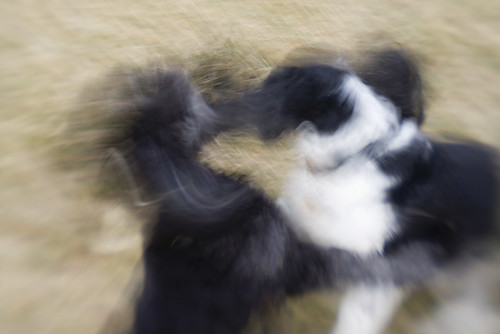 So, Michael Vick has been banned from playing football after striking a plea deal for dog fighting. After his plea agreement, the NFL banned him from playing football. I think this is wrong, and don’t agree with their decision, but not for the reasons you might suspect.

First off, let me start by saying that I detest dog fighting or cruelty to animals in any way, shape, or form. What Vick did to those animals was cruel and he should be punished under the fullest extent of the law for his crime. But, this isn’t really about Vick. It’s about the NFL. (For reference, in case you’re wondering, the dogs in this picture are actually playing.)

Football players in the NFL routinely use drugs (steroids or not,) get arrested for DUI’s, are known wife-beaters, regularly use the service of prostitutes, and are known to carry illegal firearms. This is their culture, this is the culture the NFL supports, encourages, and spreads throughout the country. Most “college” football players cannot read at an 8th grade level. I put the word “college” in quotes because they seldom (if ever) attend classes, are routinely given illegal drugs (pot, steroids, other stronger drugs are actually in some “college” player contracts as well as the services of prostitution. These are illegal acts and yet larger “football” schools, such as UT, provide for these routinely in player contracts.) Football players are given special dorm rooms, separate gym facilities, do not attend “regular” classes (most don’t attend classes at all) and do not own any books (makes sense, since they don’t know how to read, right?) This behavior pattern only escalates and continues when college NFL players turn professional.

When stopped, questioned, or arrested for a crime (any crime, from spitting on the grass to murder-just look at OJ Simpson) football players are routinely given a “free pass.” Football players, after all, are “DA BOYS” and this behavior is excusable if not acceptable. “Boys will be boys,” society seems to say when it comes to football players.

So, given that the majority of the players in the NFL cannot read, write, or speak a coherent English sentence, are all drug addicts, most have committed crimes, if not beating their wives, then murder or some kind of felony charge for which they were given a “free pass,” who are they to judge Micheal Vick? Wasn’t he just behaving as expected? I mean, he is part of the NFL, isn’t he? Why should he behave any differently from the rest of the lot? Why should the NFL suddenly have morale standards? Why should Michael Vick be singled out?

If we as a society are going to continually value these illiterate drug users who sleep around and routinely commit crimes, then Michael Vick should be celebrated. After all, he’s a “star” football player-he’s one of DA BOYS. The NFL should welcome him with open arms into their felony club. The NFL is a national disgrace but nobody seems to care. It’s all about DA BIG GAME and DA BOYS.

Michael Vick should be right where he belongs-playing with the rest of the illiterate drug using screw ups who commit crimes and sometimes toss a ball around on a lawn like a moron.