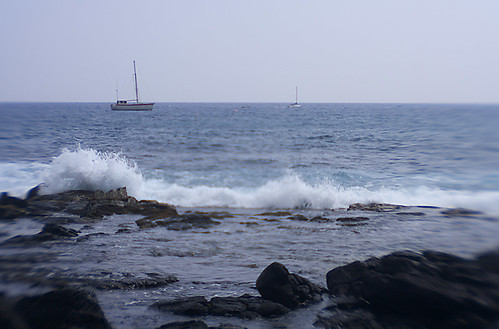 With all the rain we’ve had over the past few weeks (months?) this could almost pass as Highway 183 these days.

Yesterday, Mopac was flooded. For those of you who don’t know, Austin has several “commuter” roads that stretch through the middle of town. Interstate 35 (or I35 as we call it) is one of them-it’s noted for it’s “upper deck-” two lanes up top, two on bottom, and Mopac is another. Mopac gets it’s name from the railroad, Missouri-Pacific, who actually paid the City of Austin to build the road (originally) around the railroad tracks. Mopac is noted for having a train run down the median of it. Yesterday, I guess, it was noted for having a river run down the median of it. It was quite flooded in spots. When Mopac slows down, the entire City is in a slump, really, because everybody seems to take Mopac everwhere. It’s the central artery of Austin, in more ways than one, really.

An interesting thing about the way people drive. Native “Austinites” (as they are called) don’t do inclement weather. They just don’t. If there’s a drop of rain, a spec of hail, a snowflake, or anything like that, within, say, a twenty mile radius? Driving stops. They just don’t know what to do. It’s like you’ve gone and hit Bubba over the head with a 2×4 and nothing you say, from that point forward, computes.

Other drivers? Well, as you might guess, not so much. They can drive in the snow, the rain, the sleet (ok, maybe not the ice. Austin gets horrible ice storms, where the entire earth gets crusted in black ice. Really hard to drive in. For anybody.)

So, this got me thinking. We should start putting up signs that say “Seattle Drivers Keep Left.” It would aid in the confusion out there, don’t you think?

All that and they have better coffee than we do.