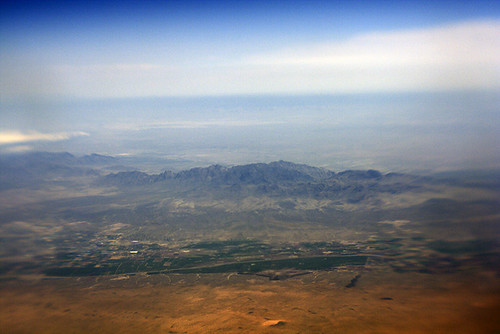 Here’s another “fly by” shot for you. This one was a bit closer to Phoenix, so you can actually make out some city “foo” and all that.

Yesterday’s field trip that was only about two blocks away turned out to be pretty great actually. We went to the Hill Country Water Gardens, which is a lovely place. It’s in extra “bloom” this year as well, since the rain hasn’t stopped. Everything’s very lush and almost tropical, so that place was extra green.

I had been there before, though not to photograph, just for a visit, kind of a thing. When I was there last, it really wasn’t fantastic-it was really not much to talk about at all. I was surprised that it’s bloomed (excuse the pun) into a thriving business. It’s a great place to photograph so the 4 gigs or so of Compact Flash that I went though, I’m sure, will be just the start of it. With it being so close to my house, and such a fantastic find, I’m sure to go back and shoot there more.

They breed koi, both Japanese and domestic, there, so I found myself oddly addicted to trying to photograph the koi beds. It’s very hard to photograph koi actually. They are such lovely creatures but they don’t sit still and they don’t make for much visually, once they fill in a frame. Still it was worth a shot (again, excuse the pun) to give it a try. I might have gotten one or two motion blur, koi as silk, kind of shots, which I will post once i get to processing them rightfully.

The lotus were not blooming, but there was a bud or two to work with and, with about 20 or so people from the photo group there, we had lines to setup in front of some of the more popular “photogenic” scenes.

Our trip was supposed to start at 9 am, but early morning found pouring down rain. I stayed at home until it let up, and then met up with the group around 10:15 or so. At that point, the light was fantastic, very cloudy with no sun at all, and so we got great shadow detail. It was quite humid and buggy there, which again made for great shadows (read: none!) but, man did we get eaten by the mosquitoes. Especially in that joint, what with all the ponds, fountains, and water features running about.

I did some weird abstracts and close up (Uta Barth-like) shots of their pottery which is also great. Lots of giant pots, urns, and containers, in earthen tones and soft colors. We’ll see if any of those come up and, more importantly, if you recognize them when they do.

I’m quite busy prepping for another portfolio submission and the big Utata project this week, so I don’t know how much time I’ll have to post, but I will try.

Hopefully end of the week will bring in good news and images making the rounds of view. Until then, watch out for the mosquitoes and the giant roaming photo groups. You never do know when they’ll show up in your backyard.