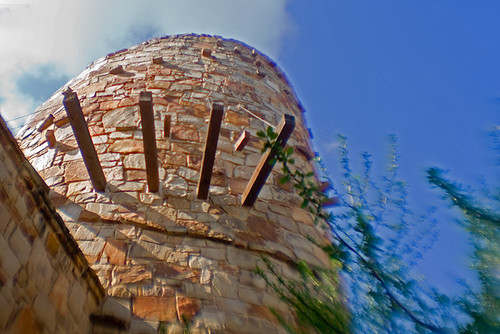 TopOfTowerNo1, originally uploaded by carolWorldLeader.
Last night’s American Idol was supposed to be a big upset but dialidol had predicted Stephanie was at the bottom for a couple of weeks now. Still, hurts my ears to think that the silly kid (Sanjaya) is making it while another, good singer, gets cut. Ah, maybe all that much easier for her to now go start a recording career. Stephanie, dear, we love you now go make records, sells lots of them, and retire quick before that scretching cat of an idol-mate finds his lost way into a recording studio.

In other “klatch of crazy people distracted by Oooooh, blurry!” news, I have yet to try out my new 3G and time is running out. I want to start using it before Hawaii. Hey, at least I ordered more compact flash, which should be on it’s way.

It’s raining today in River City. It’s raining, dark, and damp and I get this email from Hawaii telling me that there’s a new school opening up out there, in the town of Volcano, that’s going to have some high powered photogs jaunt along for a spell. Yes, you read that right. The town of Volcano.

Interesting thing about my trips, everytime I go someplace, almost anyplace really, I get the most oddball directions. In Venice, it was “take a left at the third Gothic cathedral. You want the third, not the second, not the one with fewer angels on it…” Sure, that makes sense.

Please don’t tell me to take a right at Shipwreck, I don’t think I can deal with it right now.