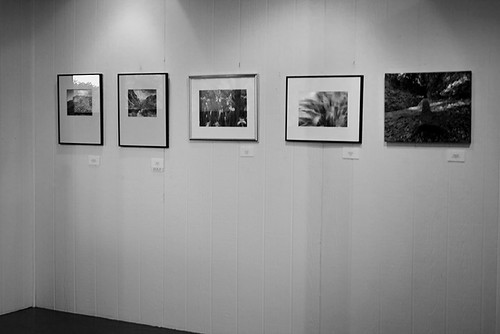 The latest rage on Flickr appears to be taking pictures inside of galleries that are showing your work and then uploading these shots into your Flickr stream, to show all your friends you latest show. It’s not a bad idea actually, it lets you show off your work but it seems a bit odd to me. Almost like “binge drinking” without the drinking, if we keep taking shots of shots and putting them in galleries, where will it all end? I mean, if I take a shot of my gallery show, upload it to Flickr, and it starts getting hits, is that really art? Or is it something else? Wouldn’t it be kind of like super post-modern “meta” art of some kind, you know, that sort of “art about art,” not really art for art’s sake? All sits kind of weird with me, even though I sometimes cave and do it.

Another “weird-ism” but in a good way happened this week. Seems a favorite photographer of mine, Ken Rosenthal, has been getting quite a lot of write ups on Flickr as well. He’s noted for doing quite abstract work, really blurry out-of-focus, direct to memory kind of stuff.

For those of you who don’t know, there’s a psychological aspect to doing abstract art. Abstraction, you see, (in any kind of art form, not just photography) is sort of like a direct input into the subconscious part of the brain. A person listening to a skat singer, for example, might not be able to make out specific words (like say “cat” if the songs were about “cats”) but might actually, because of the way the brain works, be able to come up with a word that rhymes with “cat,” like, say “bat.” Pretty freaky, eh? It has to do with the way our brains “work,” the hemispheres, memory (both short-term and long-term) and all that but, basically, the gist of it is that, by “listening” to a skat singer, it’s possible for you to impart meaning (and memory) from what he (or she) is saying without actually making out the words. It’s like a short-cut direct into our long term memory banks, avoiding that pesky short-term “multi-tiered” setup, for good or bad. Words, figures, forms, and shapes, all come from one part of our brains, while memories come from another, hence the tomfoolery behind the abstraction.

So, when you start getting into abstract art, be it singing, photography, painting, or the like, it’s said that people can be divided into four groups:

Goes back to that old saying about “can’t please everybody all of the time,” I guess. Still, Ken’s stuff is really neat and worth a second (third, fourth, maybe first all over again, etc.) look.