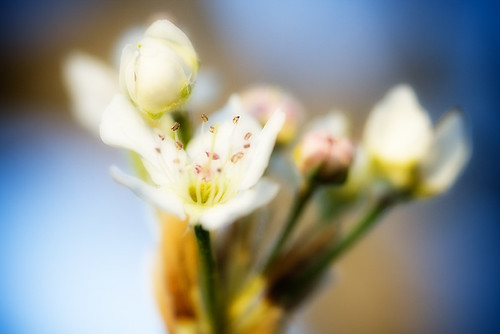 HDR came along. HDR is short for High dynamic range. In the days of old, if a photographer were to take a picture looking out a window, let’s say, the window might appear too bright while the inside of the room too dark. This is because, while our eyes can adjust to the different levels of light, our cameras and film could not. With Photoshop, by using a technique blending multiple exposures into one HDR image, we could pull out the detail from the light/dark image. We could effectively blend several exposures of one image into one HDR image that would show us, for example, the light from outside of the room at the same time as the inside of the room, properly exposed. Most HDR techniques employ some kind of bracketing and blending, just like the days of old, in a way, where we would expose and develop the film but maybe dodge and burn the resulting print, to keep the window from blasting out but pull out detail in the room. Only HDR gave us very much detail and it was easy to do on our computers. We could stretch those shadows and highlights to places they’ve never been before.

The pros of HDR are that it’s good for things like church interiors (think stained glass) and it really gives depth and detail to clouds. The “cons” of HDR are that the resulting image can often suffer from too much detail. I have a friend who says, “they make my teeth hurt.” That’s true. They can look over-sharpened and gimmicky. They sometimes look “other worldly” like something from a storybook. Many people find them too fake, not believable, too harsh to even look at. But, the detail is there.

Then, there was a band of photographers who decided that they liked HDR, for all it’s detail, but they didn’t like HDR for the “teeth hurting” aspect of it. They tried to use the same techniques employed by the HDR folks, only instead of making HDR images, or images with high dynamic range, they decided that they would use HDR techniques to render something that was more in line with what the photographer actually saw. TTHDR or true tone high dynamic range was born.

The pros of TTHDR are that it can pull out detail in an image and that it helps the photographer render something close to what he or she saw. The cons of TTHDR are that sometimes the resulting images lack a bit of “magic.” They don’t have the same detail as HDR. They don’t produce the same clouds. They can look, well, sort of ordinary. No more storybook images. No more “magic” but, well, at least you’ve evened out the shadows and highlights. (No more blasted out stained glass windows, right?)

Back in the days of old, there was a photographer named Freeman Patterson. He was a very good photographer. He had a friend named Michael Orton. Michael Orton got the idea (maybe from Freeman Patterson himself?) to create “slide sandwiches.” The technique involved taking two slides, one slightly overexposed and in focus, and the other much more overexposed and very out-of-focus and “sandwich” them together-putting them in the same slide mount, effectively making one slide from two. This become known as the Orton technique. I actually tried this back in the day-it involved using a slide mount “breaking” machine that would pull the slide out of the mount and allow you to sandwich the slide in a new glass mount. It was a pain to do because of all the work but the resulting images were cool.

Fast forward to modern times and we now celebrate something called the “Orton” technique, which is a digital way of “sandwiching” slides. Basically, you take one image, make it into two, throw one out-of-focus, adjust the exposures on both, and blend them back together, making a digital “sandwich.” It’s hard to describe than to actually try on your computer. This “digital Orton” technique (or just “Orton”) became popular. It was easy to do and the resulting images had a bit of “magic” and softness to them.

The pros of Orton are that it can make everything look soft and dreamy. Because of the out-of-focus “halo” surrounding the objects in the image, it produces a nice dreamy effect. The cons are that it can really hike the contrast in the resulting image. Your whites can blast while your shadows block up very quickly, thanks to Mr. Orton and his band of sandwiches.

So now we have an Orton image with too much contrast, blocked up shadows, and blasted out whites. How do we fix that? Well, we want more definition and contrast so, digitally, we turn to….you guessed it. HDR and TTHDR. Now we’re seeing TTHDR+Orton images as well as HDR+Orton images pop up on the web.

The pros of these “blends” or “mash-ups” are that HDR or TTHDR can really pull up the dynamic range, giving us detail and even tonality. The Orton can give us that “soft, dreamy, other worldly” quality we like but eliminate the “teeth hurting” that comes from just the straight HDR technique. It’s like the magic’s back only better than before. It’s believable. It’s all “pretty” and “soft” without looking “fake” or “overly sharp.” We’ve got just the right amount of detail, an even tonal range, and magic around the edges.

The cons are that it’s hard to understand all of these letters and it can take a while to first HDR or TTHDR and then Orton an image. Not to mention what would the neighbor’s think, right?

Oh, and I still kinda miss the sink.

(This is an Orton image of a flower macro shot. Not my usual, I know but still an interesting change for the spring, don’t you think?)