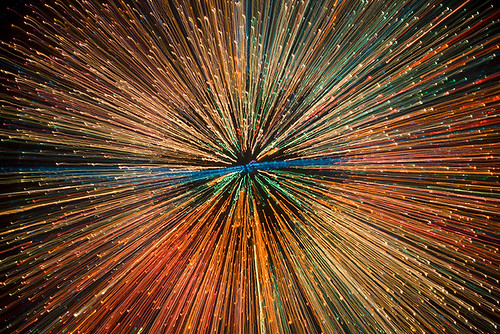 This is the “giant exploding yard draidel that looks like a fiberoptic pom pom or maybe something from outer space” yard ornament from 37th Street I have been telling you about all week. Aren’t you glad you finally got to see it? This was taken on the zoom, directly under the yard draidel, behind the square snowman and sort of to the right of the hanging decorated tin cans that were painted to look like fish. Hey, it’s 37th Street. What do you want? Ain’t no simple wreaths in this ‘hood.

In other news, laptop has yet to arrive. It’s shipped and it’s in transit, actually it’s in Austin and should come home sometime today. I can hardly wait.

They unveiled the “Extreme Makeover Home Edition” that was filmed in Austin this weekend, actually, yesterday at 1. It’s a beautiful house. Stone with lots of space, very attractive looking. If I have time over the next few days (weeks?) I’ll go take some photos of it. I thought about going yesterday but then decided against it, since it was full of Home Makeover people, including a large crowd that had gathered out front for days. I didn’t want to get in the middle of that mess. Once it settles down, I’ll go take some pictures of the “aftermath.”

Didn’t one of the Star Trek captains like Earl Grey tea? You can keep the exploding draidel, I want some Earl Grey right about now.

Until next exploding teacup…