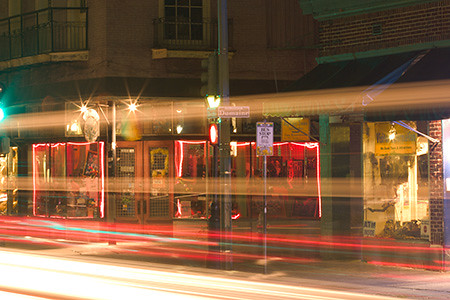 (or what even Google doesn’t know)

In Austin, Texas, every year since 1980, the folks around 37th Street (actually 37th and a half Street, don’t get confused. We wouldn’t want you to have to get out and walk that last half block) have put up Christmas decorations. Not just any Christmas decorations, mind you, they go overboard with stockings, Santa garb, screaming neon streamers, and lights galore. Overboard, in this particular case, is even an understatement, as it’s been speculated that you could see these holiday lights from the space shuttle. The folks on 37th and a half Street in Austin, you see, are world famous for putting up this kind of decor. Loud, wild, obnoxious, unforgettable Christmas decor, is how I would describe it really (although words don’t actually do it any kind of justice.)

So, it should be no surprise that I plan on going to 37th and a half Street again this year, to photograph the Christmas decor. I do it every year, actually, it’s something I kind of enjoy, even if I never really get great photos of the now famous, annual 37th and a half Street spectacle. Some years it’s hot outside, some years, it’s cold, some year’s the lights are better than other’s, some years, well, let’s just say there was the odd “incident” involving an old TV that had been gutted and turned into a screaming neon, glowing, overy lit up fishtank that had little to do with yuletide, Santa, or anything even closely resembling a reindeer. Still, that doesn’t stop the good folks on 37th and a half Street from putting up their own litlte “unique” blend of 37th and a half Street Christmas lights. It’s why we love them, it’s why we notice them, it’s what they’re there for (well, ok, maybe not but, like, you get the idea.)

But, this year something odd is going on. A few weeks ago, the newspaper ran an article about how the fate of the now annual 37th and a half Street Christmas light display was, in fact, in question. Maybe they aren’t doing it this year, the paper speculated. For whatever reason, the good folks at the paper put it into our collective heads that, for one reason or another, the folks on 37th and a half Street were going to celebrate the holiday season this year in the dark.

Since it’s close to the time that the lights would normally be going on, I thought it would be a good idea to google to check and see if the lights were even going on at all. So, I googled, I wiki-ed, I even flickr-ed and what did I come up with? You guessed it: nothing. That’s right, I got nothing. Nothing, I tell you. No “insider” information, no details, no “scoup” on the status of the lights. Nothing.

So now, what I want to know is, what I really, really want to know, is how does an entire city block, in Austin Texas, the heart of a technology center in the United States, hide so well a bunch of Christmas lights-lights that we can even spot from space!-from the web crawlers, spiders, auto “bots,” and other odd “technological bits” on the internet?

Until next hidden in plain sight Santa hat and light bulb…