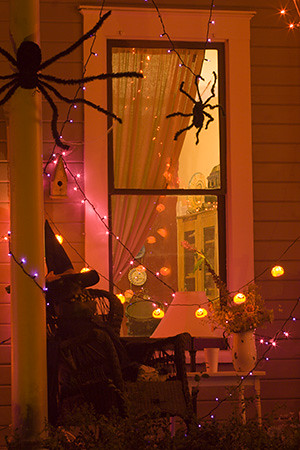 It dawned on me yesterday that I’ve been talking about “Halloween” here for a while and that, while many of my US-based snowflakes know what this means, some of you snowflakes living in uber-cool locales that are not contained within one of the “lower 50” may not know exactly what that is. Don’t worry, my “foreign” (well, foreign to me, right?) snowflakes, this is something I can easily fix. Wonder no more, for I am here to muddle and confuse (or maybe not.)

Halloween, you see is a holiday of sorts in the US. It’s not really a holiday in that we don’t get a day off from work, buy it’s a holiday in the sense that we decorate our yards and give out candy. The way it works is pretty simple. Folks get dressed up (it helps if you are below the age of 12, but it’s not a necessity. Last year, while driving down Highway 183 on Halloween, I passed a woman wearing a tiara. So, it’s safe to say you can contribute to the madness that is Highway 183, while being “properly” dressed for Halloween, just don’t expect any candy for your troubles, ok?) Then, in the evening, in a fit of what we like to call “trick or treating” young children, dressed as witches, devils, sponge Bob’s, Jimi Hendrixes, and the like, go door to door, ringing bells and shouting, “trick or treat!” After answering the door, and pretending to be surprised, we hand out candy. (The next day, the day you probably think of as “All Saint’s Day?” That’s just “belly-ache” day in the US.) It’s a ritual that happens every year really and it’s kind of fun because, well, some folks decorate the yard and we all get to each too much chocolate.

On the subject of “lost souls” the band The Who have a new CD coming out. You know what this really means, when you get down to the “down and dirty” of it all, don’t you? Now they can greenlight another CSI show because, well, they have more theme music available for the series theme song. Anyone up for CSI Dallas, CSI DC, or maybe CSI Chicago?

No, actually, the “real” question that’s still on the table is that, now that The Who have a new CD coming out, how many farewell tours do you think they will end up doing before they actually stop touring? (Hint: they are currently at 3 and counting, although that last one was a real doozie, it took out a bass player.)

Even so, if there’s like one song on the CD, he’ll be able to gloat (“See, I told you I was doing ‘research.’ And, to think, all this time, you called me a pervert. Ha!”)

Maybe, when The Who start touring again, they can bring along Nine Inch Nails and they can take up more mundane hobbies on the tour-you know, something less dramatic, like, say, collecting doorknobs. (Gasp!)

Oh, and I forgot to tell you. About that whole “Halloween” thing. Little kids, all dressed up, ringing stranger’s doorbells? Makes the child pornography industry grin from ear to ear.

Oh the horrors of it all. (“Mamma’s got a squeeze box Daddy doesn’t sleep at night…”)