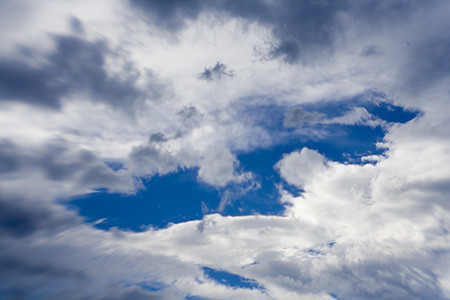 Here’s one more from the cloud “experience” I had over the weekend.

Once again, the skies are about to open up on my head. And, once again, I’m thinking about going outside, with the camera, to take some pictures. I just could not believe how pretty the clouds were tonight. I just don’t know what’s wrong with me either. I mean, on the one hand, I’ve been suffering from a complete lack of photographic inspiration-not wanting to shoot anything, anytime, anywhere. On the other? Clouds. Lots and lots of clouds. All I see, clouds everywhere. And they’re pretty too. Pretty, pretty clouds. Just begging me to take their picture.

I entered a photo competition the other day. I thought about it and was first like, “no, I shouldn’t.” But, then, I did. I guess I just felt like I sort of had to, despite the fact that I know I’ll never get in. Even if I do get in, it won’t mean a thing to me. I mean, so I’ll send another photo off to another gallery in another state and I’ll put another line on my photographic resume and maybe I’ll sell something and maybe I won’t and, in 30 days, the picture will come back to me, or maybe it won’t but the world won’t change. There won’t be peace in the middle east or fewer people starving in Africa or anything right? So why even bother doing it? It’s not even fun to enter these things for me anymore, knowing that I won’t get in or thinking it some kind of a freak accident if I should happen to get into something somewhere and some snobby gallery wants to hang up my crap-on-a-stick. I mean, that’s not fun, I mean like, really fun, is it? Does that sound like fun to you? Is that your idea of fun, because, maybe I’ve just been doing it for too long but, it doesn’t sound like a lot of fun to me.

It’s nowhere near as fun as shooting clouds, that’s for sure.

Until next nebula in the nighttime…