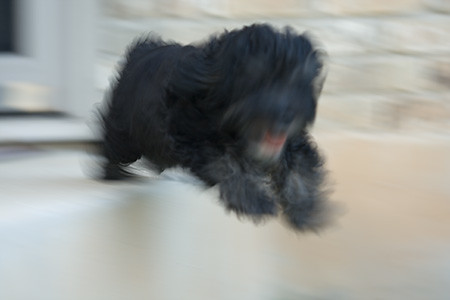 I know, I know, I haven’t been blogging that much lately. Call off the hounds, stop the search, bring back the choppers, I was just busy.

You see, I have a new man in my life. He’s cute as a button-a strapping young thing really, almost too young, with thick black wavy hair, deep dark eyes that could melt your soul, and, the best part? He’s almost housebroken! Yes, my snowflakes, it’s true. In the “Quick! Hide your socks, guard you pant legs, put your shoes in a vault” department, I have a new puppy.

Meet Chase. Chase as in Chevy. Chase as in car. Chase as in “chew that little squeaking rubber ball and stop eating my couch” chase. Chase as in Chasey Jones, my little engineer. Engineer, HA! He’s more like the wild man of Borneo, but he’s mine and I love him so. He’s precious. He’s a five month old (!) cockapoo, almost all black, with a white tuft of hair at his chest and wild white eyebrows.

Speaking of this weekend, small treasures, and dark wavy hair, I saw part of National Treasure this Independence Day as well. I guess you could say I “squeaked” through part of the movie, since Chase had his rubber ball trumpeting the treasure chasers and I only really got to see the tail end of the movie-you know, the part where the hero (that would be the former tampon salesman, Cage) lights up a torch and illuminates the great treasure which, I can only presume, was the “National Treasure” in “National Treasure.” Since I only caught the end of it, I can’t really say for sure if I liked it or not but it’s yet another in the Nicolas Cage “boopfest” that TiVo has drummed up for me to watch this Independence Day. I saw the end so that kind of spoils it but it looked good enough that next time it’s on and I’m home, I may pull up a torch, sit on what’s left of my couch, and watch the whole thing.

Speaking of TiVo’s, I heard a DJ complain about hers the other day on the radio. Seems it started recording material she didn’t request and then, in an actual fit of madness, but what she swears is actually some kind of grand government conspiracy, it went crazy recording Burt Lancaster re-run movies. (Imagine that. Her TiVo recorded a movie without Nicolas Cage in it. Wow. It must be like broken or something.)

At least, I think she said Burt Lancaster although I’m not really too sure, as I was too busy laughing my ass off at the current state of TiVo affairs to really pay attention. This time though, you bet I’ll wise up and *not* use my TiVo to find out who, exactly, Burt Lancaster is, because, well, I’d probably never recover from that mayhem. I’d be stuck on what’s left of the couch secretly hoping he never made a movie with a murder in it (or that he co-starred with Nicolas Cage in anything. Anything at all. Especially not like a tampon commercial or one of those Japanese ads for like toothpaste or something.)

I’m also fairly certain (although I could be wrong) that George W. could give a crap about what’s on our collective TV sets. He’s too busy squandering our tax dollars in far away lands to give a crap about evening television and all. (He’s got sinking trailers and $900 hammers to worry about, could he possibly care about a TiVo gone crazy?)

I’m pretty safe in all this too. I mean, as far as I know, IMDB is still conspiracy free, although I do have to wonder where they get their cheese after listening to the DJ rattle on about George Bush, the war in Iraq, phone and wire taps, secret committees, the microchips of TiVo, grassy knolls, and such.

Although, in this grand conspiracy, some big questions still remain. Does Nicolas Cage look anything like Burt Lancaster? Does George Bush have a thing for TiVo’s? Will Chase chew through the wires in the back of the TV set and short out TiVo, thereby putting a poetic end to the never ending Nicolas Cage “boopfest” with his teething? Will I have a couch left to enjoy that when it happens? Will the rubber ball ever stop squeaking? Are pant legs anywhere in Texas safe from his puppy wrath? Who shot JR? What’s a grassy knoll and how, exactly, does it differ from a hill anyway? Is Elvis still dead? What does Willie smoke? (Ok, that one’s maybe not such a mystery. He is, after all, the “Herbal American.”) When people chase for treasure why do they use torches and never flashlights? (What do these people have against electricity anyway?) And, most importantly, where does the government get all that cheese and, when this seemingly infinite supply finally runs out (you know it will) will they start handing out free TiVo’s instead?

If they do, you know this government mule will be last in line that day. I mean, who knows? With my luck, I’d end up with one that records only C-SPAN.

Until next wild Borneo-based puppy chaser…