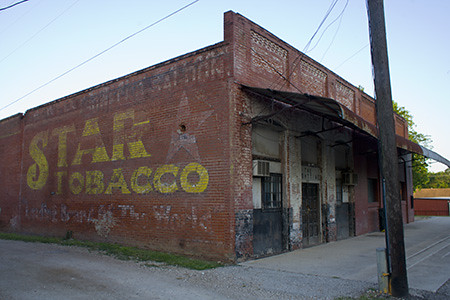 Ok. Maybe more than one.

On the way to work the other day, I finally heard The Arctic Monkeys sing. 101X, a local radio station in Austin, was playing one of their songs and I got to listen. It was odd really, almost like some proper British variant of gangsta rap or something. Can’t say that I like it, can’t say that I hate it but, I’m glad I finally got to hear it because, well, now I can say I’ve finally heard an “arctic monkey” sing. (Gosh, I feel so spanked now.)

And, speaking of things bad, spanking, and the like, last weekend I went out of town, off to Brenham, Texas, the place where wholesome, fresh, innocent, “vanilla” (and, um, as I’ve come to find out lots of “other flavors” too) Blue Bell ice cream hails. I got to photograph a tattoo parlor (it was closed) there. I *so* want to go back and get inked (but I won’t) or, at least, take some snaps of some biker chick getting yet another “Sam’s Girl” emblazoned on her…well, you know.

I also “broke and trespassed” into an abandoned building and did a series of ghostly portraits as part of my quest to take a self-portrait (which you can read more about later on.) The building had this rotting wooden floor in parts, that we were afraid would just give in, and really was spooky looking. I was afraid I was going to fall through the floor, but I didn’t (only the good die young or, um, fall into Hell by means of rotting wooden floors, as the case may be.)

I guess I really wasn’t that “spank worthy” but, “spank worthy” or not, I then traveled to the Antique Rose Emporium where I pissed off some mighty big, bad bad, bumble bees (Duck! Run!) The light was blasted, so we headed back towards Austin, but not first without stopping at Shorty’s in Elgin.

For those who don’t know, Shorty (owner and sole proprietor of Shorty’s-in case you couldn’t figure it out) has the distinction of being the single most cantankerous person I’ve ever encountered while photographing (and that’s pretty dubious, really, since somebody once tried to shoot me. With a gun. A loaded .45. Hard to trump that, really, but, over the years, Shorty’s somehow managed.) Shorty once got so mad at me-mad because he didn’t want me taking pictures of his, ahem, “fine” establishment (located in the middle of the worst neighborhood of Elgin,) mad because he didn’t want any photographers anywhere near the place-that, while my photography group was taking pictures of his brick wall (this would be the brick wall *outside* of his bar and grill, mind you. Actually, outside and down a back stinky alley) that he tried to throw large pots of boiling water at us.

Shorty would run out of the place, screaming and throwing without so much as a “what are you doing?” I once was so afraid of Shorty, that I was just afraid of Elgin. I was afraid of shooting the wall, afraid of Shorty, afraid of pots of water, afraid of getting caught, and just generally afraid, so I started avoiding Elgin.

Shorty be damned, this time around, KathyV and I hit Shorty’s at “perfect” light (15 minutes before sunset) and stopped on our way back to Austin to take some pictures.

Maybe it’s “photographic forbidden fruit” but, there’s something about that wall, knowing I can’t shoot it, knowing the owner doesn’t want me to shoot it, knowing that it’s “off limits” as it were, that attracted me to it. I short Shorty’s, with KathyV, at perfect light, and really enjoyed it. There we were, out in the middle of the big, bad, ‘hood in Elgin, with Shorty nowhere in sight and perfect light on that wall. I just had to shoot it, didn’t I? Could I really let that opportunity pass me by? Maybe I really enjoyed that “outlaw” feeling I got from breaking Shorty’s rules, or maybe the wall really is that cool, who knows? (Well, you can judge for yourself, this is a picture of Shorty’s blessed wall.)

To paraphrase Bob Dylan, “I was so much better then, I’m badder than that now.”

Until next bad, bad thing…