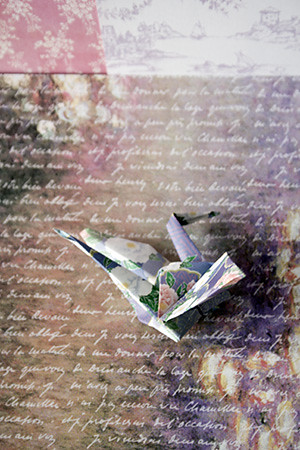 I’m addicted to paper. I buy paper, I save scraps of cool paper, I know where all the paper stores are in Austin, and, sometimes, I even make paper. I know all about sizing, slurring, and deckeling and all kinds of “technical” paper making terms.

It’s pathetic really but, if they ever have an AA style meeting, where all sorts of pulp-a-holics show up and confess their sins, I’d have to be there, among the masses, alongside the book collectors and the label sniffers, sitting there in denial. “My name is Carol and I am addicted to paper…” I would say at each meet and greet even though the whole time I’d be telling myself, convincing myself really, that I could just quit any time I wanted (Ha! Yeah right.)

So, a few weeks ago, my friend Lois was telling me about how her granddaughter was addicted to origami (another member of my “elusive” AA club-to-be in the making?) and how she started to make thousands (!) of these little paper origami cranes.

Lois asked if I knew of anybody who would want some and I immediately thought, “Oh! Pick me! Pick me!” since I have such a paper fetish and all. She gave me a paper grocery bag (not plastic!) from Whole Foods (I love that place. They have a chocolate fountain, a big one, a derrick, really, and they give out paper sacs. Nirvana, don’t you think?) filled with origami cranes, which I then put into the back of my car.

So, I’ve been driving around with origami (sounds like a name for a band, doesn’t it?) for about a month now. With the cranes neatly tucked away in the hatchback (driving down Mopac, 360, and 183. Too bad I couldn’t get frequent “flier” miles for these birdies) until this weekend, when I finally got off my duff and started taking pictures of the cranes (kind of like Dick Cheney only without any actual buckshot.)

Please take this as advanced warning. This isn’t the last you’ll see of those cranes. They’ve really just started flying around flickr, really they have.

You have been warned, as I am just starting to play.

Until next paper bird that doesn’t really fly…