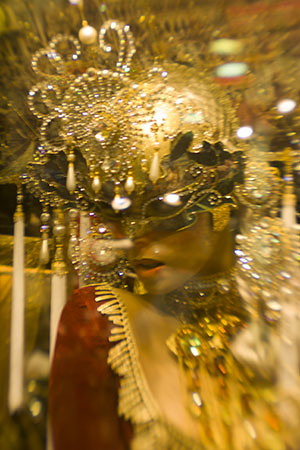 This past Friday, the good folks at the SXSW music, movie, and interactive convention announced this year’s entries for the SXSW music festival. Much to nobody’s surprise, the Trail of the Dead were not on the list. (Hey, I still just had to check their website, right? Just to be certain.)

For those of you who don’t know Trail of the Dead, they are a local Austin act (actually named, I swear I’m not making this up, “…And You Will Know us by the Trail of Dead”) who are famous for, well, let’s just say, not just their hard-rocking music but, in the spirit of early Led Zepplin, Keith Moon, Kurt Cobain, and other really hard rockers-trashing the crap out of the place, anyplace, that would be, where they happen to play.

It all started out innocently enough. They were booked at SXSW a few years ago (actually, probably like 8 years ago or so.) They trashed a hotel room, got booted out (“for life!”) of said hotel room, and moved onto the next. Trouble is, after eight years, multiple hotel rooms, trashings too numerous to count, general mayhem inducing pseudo riots, a multitude of fires and broken TV’s later, they now seem to find themselves in a tight spot-they can’t find a venue willing to hold them.

A few years ago, they thought they would be “clever” and try to rent a boat upon which to perform their typical riot-inducing act. Needless to say, if you even want to house hordes of drunk, bottle throwing, bar room brawling, fire lighting (!) hoodlums, a boat is not your best choice (well, in hindsight, maybe they weren’t the first party boat to sink upon Town Lake, I suppose. I mean, there was that great Hippie Hollow incident a few years ago that even made CNN, right?)

Another SXSW brought us Trail of the Dead trying to get creative yet again and found them applying for a street permit…you know, a permit so that they could be street performers. This, alas, failed them too, seeing as they ripped down a banner from a beer sponsor at a prior SXSW and were kicked out yet again. (The City of Austin, in it’s, ahem, infinite wisdom denied them a street permit because, well, they didn’t want them “free roaming…” you know, kind of like a herd of African Wildebeest. They didn’t want to have to pay extra security and ADP overtime to fend them off with a stick and, unlike wildebeest, the Trail of the Dead do tend to leave a much broader swath of destruction in their wake.)

They’ve been kicked out of the Raddison, the Hyatt, and the Embassy Suites. Even that bastion of bad taste-that rich, half-naked, bad TV starring, heiress generating Hilton clan refused them. They were never even let into the Driscoll or the Four Seasons and, well, I strongly suspect that, at this point, even the people at the Motel 6 refuse to leave a light on for the likes of them.

So now we know they are planning on playing at SXSW. We know they are up to something, big question is, what exactly? And just how many beer sponsors will it take out?

In other, more, ahem, “lively” news, my Utata project, Nocturnal, has gone live. I’ll post a link here so you can check it out.

Just goes to show you how much trouble you can get into in just one night, doesn’t it? I mean, who would have thought that, in the hours before dawn one could reek so much havoc that even a Motel 6 wouldn’t let you see the light of day?