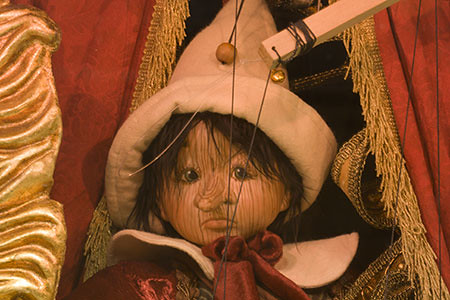 Remember what I said about images having emotional baggage all their own? About how, just like wounded people and warriors of the heart, images can sometimes have mighty strong emotions lurking beneath their surfaces.

Today I went over to Hyde Park Bar and Grill to drop off what appeared to be the last sale from the November show.

I once helped out with a website for a local (Austin, TX-based) guitar player. Being more than a competent guitar player and a nice fellow, he would always stop to field questions, amiably enough despite, I’m certain, fans intruding at inappropriate times or places. “What kind of guitar do you play,” “what kind of amp do you use?” you know, all the typical questions, which he handled gracefully, time and time again. An interesting tidbit about him though, when asked the question, “what type of strings do you use?” he would almost always respond, “same as you-puppet strings.”

The piece that I sold today out at Hyde Park was not my favorite from the show. I didn’t hate it, but I didn’t love it to bits either. I thought, when first approached about selling that piece, “odd that somebody would choose that one from the lot.” Today I discovered the rationale behind the choice. Seems the fellow who purchased the piece did so for his girlfriend. She recognized the location where the image was taken, so much so, because she had a picture of her taken there with her brother, standing in the very same location, taken when she was a child. It was one of her most cherished possessions, now forever lost due to Hurricane Katrina. Her brother, I was told, passed away last year and we all know the fate of many of the worldly possessions residing in New Orleans at the time of the storm.

When I started out as a photographer, I strived to master my camera and all its workings. I tried really hard to control everything-the settings, the light, the film, my darkroom chemistry, everything about my environment, thinking that I could make better pictures; I could will them along, if only I had control. In the fifteen years or so that I’ve been a “professional” photographer, I’ve matured a lot and approach it differently now.

We all live in a great cosmos, a vast time-space continuum that spins by our heads, blindingly fast and, as it does, images clock by us. Images, like a great “visual stream of consciousness,” whirl past and, if we’re blessed, or lucky, we snag one off the flying queue, to label it as our own. In actuality, we don’t take or make pictures any more than we really just fish them out of that great visual stream of consciousness, despite that fact that we collectively like to credit ourselves for possessing the creative hand in the grand scheme of things. We all like to blame the cosmos for our mistakes but credit ourselves for the good stuff-it’s just part of being human, I suppose.

We delude ourselves into thinking that we have any sort of control over anything. Shakespeare once said that “all the world’s a stage, And all the men and women merely players.” When I was young, I held that sentiment near. Now I prefer to leave the acting to folks like Cher and Nick Cage, but do believe that we are all, in fact, marionettes, in the grand puppet show of life, even if we try to hide the strings from sight. We don’t have control over space, time, the sun, the earth, or, much less where we’re standing when the camera goes off, despite our grand delusions and our best attempts, although we try to turn a blind eye to those puppet strings and just hope that nobody will notice or peek behind the curtain.

Today’s events have rendered me curious as to what tomorrow’s “catch of the day” will bring and, frankly, I really don’t mind my puppet strings. They’re as much a part of my work as the film, compact flash, paper, or chemistry that I use.