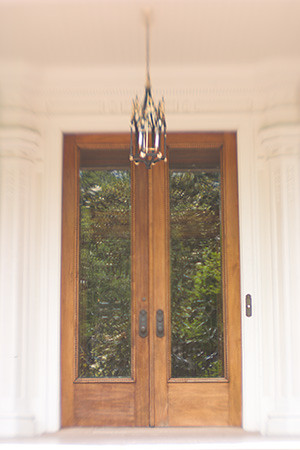 I don’t know why but I love this door. It’s silly really, I mean, in the grand scheme of things, it’s just a door, really. And, at the end of the day, there’s really nothing special about a door-they are just passageways we walk through each and every day, usually just to get from one spot to another (well, setting all symbolism aside, that is.)

But, for me anyway, there’s something special about this door (and, I guess, doors in particular.) I like the reflection of the greenery in the windows (a door with windows, there’s a thought for you.) I also really like how the shadow detail maintained up into the ceiling of the foyer.

It occurred to me the other day that, if you like to look at music videos, they are always filled with symbolic icons-clocks, candles, keys, and the like. They do this deliberately, in an attempt at adding meaning to an otherwise empty, snarky, quipy, little “3 minute movie.”

I always thought that, while making a real movie would probably kill me (if not, it’d certainly completely bankrupt me. I mean, I can’t even begin to fathom how much Compact Flash, or the equivalent, a video camera would go through.) I’d love to make a music video. Not because I love music so much (well, I do, but) simply because you can have so much fun, one would imagine, as a videographer (or director, if you want to be polite, although, come to think of it, all the ones I know tend to call themselves “vidiots”) making a “3 minute” art fest, rather than trying to conform to some studio’s idea of “what’s popular this week” or what your “target demographic wants to spot at the local cineplex.”

I’ve never been a big fan of movies-I actually prefer live theater and reading over movies-simply because movies just aren’t interactive enough for me. They just seem so flat and nonrepresentational. Photography leaves just a little to the imagination-it makes you think. It gives you the real and the abstract right along side each other, in the same place, unlike a painting, but it leaves out just enough narrative to keep some degree of abstraction. Still photos, really, are sort of arm’s length away-even if they use some kind of “visual tomfoolery” to trick you into thinking it’s all there. Video and, in turn, movies, fill in too much for my tastes. (I guess you could safely say that I have a leaning towards the more abstract but then, you probably could have guessed that from looking at the images on this site.)

Now, maybe if somebody could come along and make a movie full of symbolism and quirkiness, while leaving out some narrative, maybe, just maybe, I’d like that one. (Maybe they already have, and I just don’t know about it?)

It’d have to be either that or the video equivalent of Michael Kenna, a visual poet producing a virtual feast for the eyes. Anything else and I’d be checking the new watch waiting for the credits to roll and hoping that the flick’d grind to a complete halt sooner rather than later. (But, as Steve and others are well aware, I’d still be kind of impressed with those “moo cows” who happen along before the trailers run.)