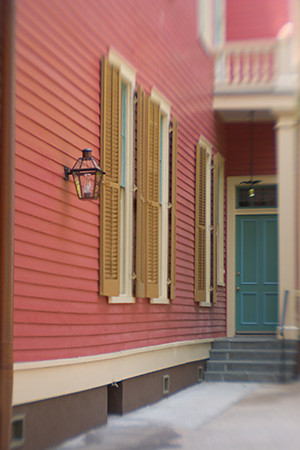 There’s been a running joke among family and friends the past few days, brought on by my unknowingly planning and booking a trip to the land of LA POLENTA (Venice.)

A long time ago, when my Grandmother (on my father’s side) was alive, she used to always talk about how she was raised on a farm in the south of Italy (near Bari. Yes, it’s true, I’m *Barisian* despite the fact that they’ve only recently made up this word.) She loved Italian food, well most of it, with the notable exception of one dish found primarily in the north of Italy: LA POLENTA.

For those of you who do not know, POLENTA is, I believe, sort of like cornbread. It’s mushy and it doesn’t taste the same to me but, I’ve been told, it can best be described as sort of like it anyway. (“Ishy, mushy, icky tasting cornbread like CRAP that they should feed to pigs really,” is how best I would describe it actually.)

My Grandmother HATED it. Despised it. Couldn’t stand it. Used to say it “wasn’t suitable to be fed to the cows.” (Hey, can I help it if she had good taste in food, despite being raised on a farm far from nouveau chic Umbrian restaurants?)

When I was a baby somebody tried to feed it to me with a spoon and I spat it out in their face. I would have probably slapped them, except that, at the time, I couldn’t really work my arms (ah! So that’s why somebody was feeding me with a spoon. I get it now!)

My Grandmother, upon seeing me spit it up, proclaimed, “Oh! The Baby! Que bella!” and immediately picked me as her favorite grandchild (Hey, some of the others ate that POLENTA crap they tried to pawn off on me too but, alas, I was smarter than all those other grandkids, right?)

I’ve always sort of avoided it as best I could and, living in the central regions of Texas (land of two types of food: Tex and Mex) never really had to worry about any random odd encounters with LA POLENTA. (You can hide in the woods or the tall grass and it’ll just mush on past you when you hear it coming in these parts.)

Fast forward to my Venice trip. Yes, it’s an unfortunate reality that I, hater of all things tasting like LA POLENTA, will be flying to none other than the land itself, the home base, the City where LA POLENTA reigns supreme, the POLENTA capital of the word: Venice, Italy. (Oh the humanity. I can’t even begin to figure out how to say “mushy crap: Please feed only to pigs” in Italian. Where is that damned babelfish when you need it most?)

What can I say? It’s genetic. My entire family HATES the stuff. LA POLENTA is like the plague only some people, methinks, have actually survived the plague. I’m quite certain that, burning in Hell for all eternity, there’s a big family-style table with folks sitting around stuffing their faces full of LA POLENTA (as their toes go up in flames, they shovel that hot food down) meanwhile the devil laughs and twiddles his happy little red fingers.

Tonight, I was talking about the lottery, which is up to 260 million dollars.

My father said, “You couldn’t even spend all that money? What would you buy?”

He said, “But, if you spent millions on houses, had a Rolls Royce in each one, and a private jet to fly you between them, you probably wouldn’t come close to spending 200 million.”

I replied, “well then, I would buy all the POLENTA making restaurants in Venice and shut them down. I’d hunt out every back alley old lady who makes homemade LA POLENTA and BRIBE her (whatever it took.) I’d put “CLOSED” signs up in every POLENTA cooking kitchen. I’d throw what’s left of LA POLENTA (before the great POLENTA shutdown) at unsuspecting passing singing gondoliers who looked at me funny. Oh, and then I’d use the rest of the money to payoff all the fines for taking out all the gondoliers in Venice with evil crusty LA POLENTA.”

Now, truth be told, I will probably try some POLENTA while in Venice. I’m not saying I will HATE it, I’m going to go with an open mind and just give it a try. I’m a mature adult and I can actually do that now (well, ok, that’s a stretch, but I am going to force myself to try some of LA POLENTA, even if it kills me.)

But, if you happen to be a singing gondolier, frequenting the back alleys around Santa Maria de Giglio in the Veneto, well, if I were you, I just might be on the lookout for some low flying cornbread.