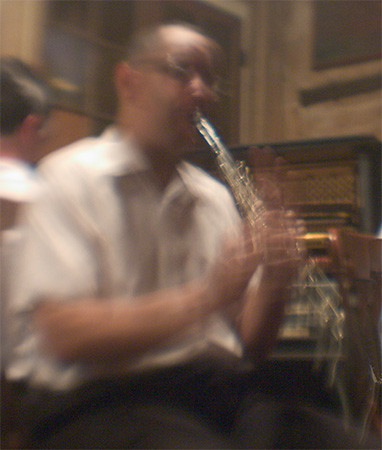 So, I went to lunch today with a bunch of photographers. It’s kind of funny how we are when we all get together. You would think that we would talk about cameras or film or something like that, and we do to some extent, but we also talk politics, what’s happening in the world, and stuff in general about our work.

Photographers are an odd lot, because we tend to travel a lot and we see the world in a different light from the way “civilians” (or “normal folk” if you prefer) look at things. We’re always looking at what would make for a good or interesting image and, because of that, we tend to just see a lot. Well, we see more than the normal folks, even over the course of just living out our days. Photographers are a very perceptive bunch of folks, in general and this can make for really interesting conversation. At least it beats what’s usually spewed over the water cooler at work anyway.

We went to Bear Rock Cafe, which is a new joint that opened up near the office. It wasn’t a bad place, they had some nice sandwiches and such. It will be fun to go there in the winter, since it’s done up to resemble a lodge. The decor kind of reminded me a bit of Potsdam, and the little cabins they used to have up there.

Of course, we all compared how much CompactFlash or film we go through, and how we were given such a hard time when passing through airports but, somehow, I think this is universal.

Mention lead-lined bags or 15G to a photographer and you will, most certainly, be met with the universal groan of discontent.

The best thing about being a photographer is that, not only do you get to go out and see the world, but you get to bring home pictures of it when you get back. It just helps to make your life all that much more interesting, don’t you think?