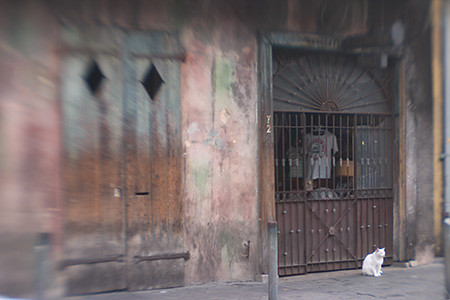 This is the last of the images from Preservation Hall. While we were photographing the building across the street, this little white cat came along. I was lucky enough to snag a shot of the cat, in front of the old Preservation Hall building, before it scooted away from the facade.

I don’t know if Preservation Hall survived hurricane Katrina. Now we’re not even sure if, what was left of it after Katrina, will be able to survive Rita.

As I type this, Rita is the newest category 4 (I believe) storm in the Gulf. Residents of the Gulf States (of which I am one, since Texas is, in fact, a Gulf state) are not taking this storm lightly thanks, in part, to Katrina’s wake up call (many residents in New Orleans decided to try to ride it out, since Ivan missed the mark and veered East at the last minute.)

Many of these folks are fleeing to Austin. Earlier today, I was in a meeting with some co-workers, and cell phones kept going off, mostly from folks en route to Austin from Galveston, Corpus, or general points south. It’s a crazy situation. Everybody usually goes to the Gulf, for vacation, to enjoy the water, or check out the beach. Now, instead, everybody is in flight mode, running as far away as they can get from the “dreaded high seas.” The beaches of the Gulf will most certainly be empty, or scattered with only a hint of brave surfers and CNN newsmen, as the storm gets closer, the waves break the shoreline, and the Gulf Coast, once again, gets battered and bruised.

Austin is not entirely out of harm’s way. The majority of the damage from hurricanes in the Northern Hemisphere occurs to the North and to the East of the location where the eye of the storm hits. Even if the storm tracks West of us, they are anticipating 70-80 mph winds and possible tornadoes set off by the force of the storm. If the storm tracks over Corpus, we could be in for a big, albeit indirect, hit.

My family and I are going to ride it out, being situated further north and away from the sea. It’s anticiapted to impact our local weather on Saturday, sometime in the evening. If I’m one of the lucky Gulf State residents, I’ll be able to sleep through it. But, if that’s the case, and I do get to sleep through the second major storm to cross the Gulf this year, I will definately count my blessings afterwards.

I realize so many of my friends and neighbors won’t be as fortunate.