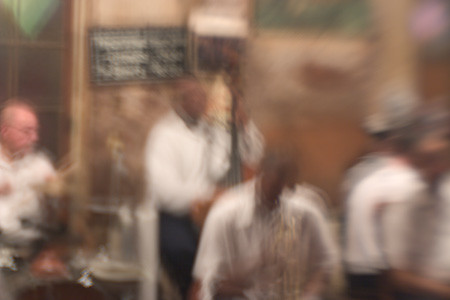 This is probably my favorite from the series. I think this looks closest to the painterly look I was going for, not to mention the entire band is in the image. That and I just love having the power to blur people, almost beyond recognition.

Speaking of powers, I’m sure I’m probably the last person in the universe to come across this website: Flying Spaghett Monster

I guess some guy wrote a letter to the Kansas School Board asking that they teach, in addition to creationism and Intelligent Design (evolution) the theory that the universe was create by a flying spaghetti monster.

As taken from their website, “you may be interested to know that global warming, earthquakes, hurricanes, and other natural disasters are a direct effect of the shrinking number of Pirates since the 1800’s.” He then backs this up with a chart showing the global average temperature vs. the number of Pirates.

This news made Slashdot yesterday, so now I’m probably officially the last person in the universe to know about the great Flying Spaghetti Monster. Well, me and my Dad, who gets all his email from me.

My favorite from the site is how there are now suddenly all these people who claim that they have been “touched by his noodly appendage.” I’m not even going to go into the meatballs-that’s just too weird.

Brian, a friend from work, went down to the Apple store to checkout the new Nanos. I told him that I was expecting a full report including, on a scale from 1 to 10, the “coolness factor” of the new baby podling line.

“Coolness, you know, like how CUTE it is, like how cool the wheelie thing is, like how it feels so ultra light in your hands,” was what I told him as he huffed out the door.

“I just want a flash MP3 player that fits in my pocket,” was his response.