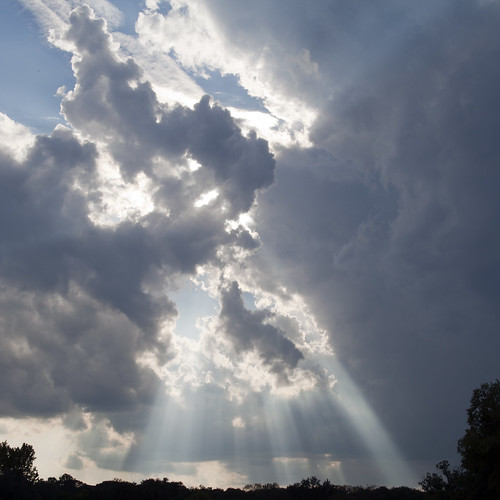 Today I went up to Salado, Texas for a brief afternoon shoot. We’ve had a lot of rain in Austin this week so I was not sure if the weather would hold or not, but I went up on the chance that the clouds would be good if the raindrops stayed at bay. I was right in that the clouds and light really were very good. Of course, I did not count on it being what can best be described as “muggy and buggy.” I swear, there were flocks of mosquitoes so big up there, at one point I honestly thought I was going to get carried away like the flying nun or something. And muggy? Oh yeah. Check on that, as we were all sweating and dripping. It was…shall we say…moist, and let’s just leave it at that.

The rain didn’t stay away for too long. Right around sunset it started as a light mist and then, by the time I checked in with friends at the local BBQ joint it was coming down in “cats and dogs” as they say around those parts. It was really heavy at times and really coming down in buckets. I’m lucky I made it back home again, what with the roads being so wet, the Interstate being filled with long distance truckers, the fog and empty night sky and all. As I left driving back down the Interstate headed towards Austin (and home) I honestly felt like I didn’t get a single shot. Not one single shot came out and I seriously felt like the entire trip had been a waste. Sure, there was God light, I did happen upon some weird looking mannequins, there was an odd-looking (but rather cute!) early Santa and I did happen upon a deer wearing sunglasses but I totally felt like the entire shoot had been a wash.

Once home, I found myself editing and, to my surprise, did indeed manage to pull out a couple of gems. I need to keep reminding myself that I’m the queen of quirk and I happen upon it lots. Sure, there was God light (in case it’s not clear, this image is what I consider God light. Actually, I believe this is called Crepuscular rays, but it also has several other names. God light, however, is much easier to spell) but there was a lot of other quirky stuff too and that’s really the money shots for me. OK, so maybe I didn’t get what you might expect me to pull out of Salado but I did manage a few oddball items, here and there so, I guess, not a total waste of a camera exposure. The peach cobbler was really good too (as you might expect in a BBQ joint.)

So, bottom line? Look for some quirk coming from Salado in the coming posts. OK, so maybe I didn’t get what I was expecting to find up in Salado, but it wasn’t a totally whiff either.