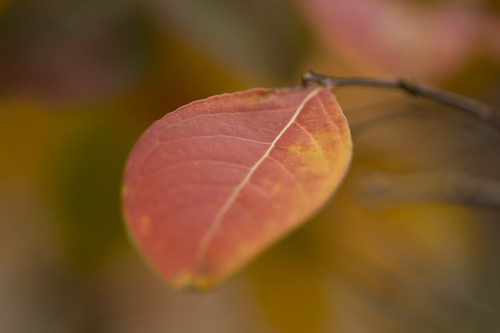 The Red Leaf Diaries have officially come to a close for the winter. Yes, it’s true. I’ve found myself suffering from a newfound fascination with Christmas (and holiday) lights. The temperatures have dropped enough that I no longer want to spend any quality time outside, under the trees, and the wind has blown what was left of our “fall color” off into the sunset. Time to close the chapter on another season. Time to dust off winter, pull her up, and take her out for a spin. The east coast, it would appear, is already out in front, what with a foot and a half of the white stuff falling, with more to come. We’re catching up, not with snow, mind you, but it has been a bit nippy around these parts. Time to bundle and drink a lot of warm tea, I guess.

I’m not completely immune to winter this year, however. I have important news on that front. I have just recently started the application process to attend a workshop with Joyce Tenneson in Santa Fe, New Mexico. Come March, I hope to be in the thick of it (well, whatever “thick of it’ happens in Santa Fe in March.) Come March, I hope I can catch a flight out of Austin Bergstrom and head off into the wild blue yonder. Come March, well, all I can say is that I hope we do not have an ice storm that will leave me grounded. Fingers crossed, mountains await, and I’m shaking in my boots knowing that one of the world’s greatest photographers is going to take some time to look at my work.

In less “horrifically frightening” news, the floor dudes are to show up this week (Thursday) to drop off the lumber and construction begins on December 26th which should give me just about enough time to clear out all of the rooms. Since I have to “get cracking” as it were, and it is the holiday season, expect a few less blog postings in the coming days.

Finally, in more “verbiage-oriented” news, the publication for which I used to write regularly (NetPerformance.com in case you weren’t paying attention) has changed hands. The “new owners” (as it were) have seen fit to pull me over to the dark side. Expect the software performance-related journal to rise from the ashes and make an appearance sometime in the new year. I don’t know when it’s going to happen and I don’t have a URL for you just yet but my popular “Developer’s Corner” column will come back in a new format. I’m more than “slightly excited” about it too, since now it’s out from under the guise of my employer and will become a truly independent publiction. Less politics and more concentration on subject always make for better reading, don’t they?

So there you have it. The red leaf marks the end of one diary and the start of another. Life is but a series of interconnected journeys. Oh wait, maybe that was the internet itself. Well, either way, if the intertube fits and all….