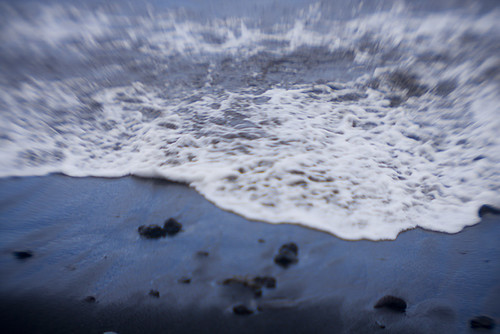 BlackSandBeachNo1, originally uploaded by carolWorldLeader.
Ok, Ok, I’ve been back for a few days. I’ve washed the sand off my shoes, put up the laundry, got some fresh groceries (oh, the leftover milk was a scent you don’t want to visit, believe me) and now I’m ready. Ready for what? You might ask. Well, ready for nothing other than my top 10 list. So, my snowflakes, without further ado, here’s my top 10 list from Kona.

These are the top 10 things I’ve learned about Kona, Hawaii:

10. They have giant sea turtles there. Somebody told me they were big, I was thinking “palm sized” not gigantic, as they actually are. Wow. They have big, giant sea turtles, who bob their heads and stretch out on the beach for you to photograph. Smile, Mr. Turtle Dude. Said turtles are excellent swimmers in the water but look rather awkward (actually, I think they are kind of cute) once beached.

9. Black sand beaches are fun, except that you still get sand in your…. Legend has it that Pele (the god of fire) will impart his wrath on you if you “steal” any black sand from the black sand beach (Then again, Kathleen tells me she heard this “factoid” was made up by a bus driver, sick of cleaning out the back of his bus. Only Pele, and, um, the bus driver I guess, know for certain.)

8. They actually do have Kona coffee on Kona, although most folks drink Starbucks. Of course, Starbucks might actually sell Kona coffee, repackaged as “Starbucks” since it tastes differently from Starbucks on the mainland, but, then again, that could be just me.

7. They have mannequins with smiling faces. Even more than smiling faces-they look sort of manic and scary. They have the same old standby “female-ish looking, let’s put a wig on her and pass her off as a girl” mannequins in the lingerie shops, however. The surf shops and sun glass huts? Now that’s where the manic mannequins hang out.

6. They have a painted church. It’s much like the ones in Texas except that, for the scenery, they painted palm trees (inside of the church.) I guess they just looked out the window and painted what they saw. Still doesn’t explain why the ones in Texas don’t have cows inside of them but, technically speaking, they do have painted churches in Kona. And, they are pretty.

5. The surf tried to swallow me, not once but several times. Watch out, man. It’ll get you. (The expression, “Dude, Surf’s up!” is actually a warning!) They had pounding, angry, violent surf in one part of Kona-it was the strongest surf I believe I’ve ever seen (and I grew up near the water.) It drenched me from the “observation deck” (hate to think what it would have done if I was out there on a long board. Phew!)

4. Dolphins swim about three times as fast as an (human) Olympic swimmer. They like to hang out in pods (schools) which are small groups. They are very social and can play with people, especially if the people have a leaf under the water (they like to do that, actually, even though they lack “hands” they can still pickup a leaf with their flippers. Trust me-it just sort of sticks to where their fingers would be, if they had fingers, that is.) Dolphins have several types of sonar, short term, mid-range, and long range. The short term is the high pitch “squeaking clicking soud” we associated with them, the mid- and long- range sonars are different sounds. They seemed to like to circle our boat. We saw between 200 and 300 dolphins on our trip. (That would be what scientists call “a big pod” if you’re paying attention.)

3. You can dry a Polaroid transfer, on Kathleen Carr’s clothesline, in about four hours, provided you have a clothespin handy. (Nothing drys fast in the tropics.)

2. Almost everything comes with an “ocean view.” The best restaurants in Kailua (Kona Inn, Bubba Gump’s Shrimp Company) all offer seating “on the water” where you actually sit out and enjoy the pounding surf as you dine. If it’s late enough, they also throw in a free sunset. (Beware, however, of #5. That surf had it out for me.) The food at both the Kona Inn and Bubba Gump’s was to die for. Excellent grub, really, really tasty treats.

1. Tiki Gods are “way cool.” There are Tiki gods at the place of refuge and also at the botanical garden. I love to photograph Tiki gods, they make for such interesting pictures. (Then again, my photographing the Tiki Gods might go a long way towards explaining #5. But, you know, you pay your money and you take your chances, as they say.)

Aloha! Look for pictures in the coming days (weeks? months?) Once the Tiki Gods let me have the Compact Flash back, that is.

PS Here’s some black sand…watch out for that bus driver!