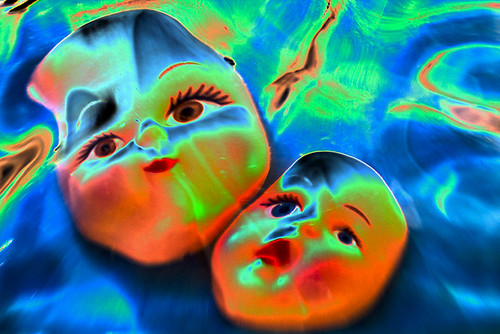 It’s been working overtime, and, HELP!, I can’t keep up. It’s recording a mountain of programming, you see. Not just a mountain, but hours and hours of Law and Order, CSI, Murder Incorporated, and any other crime drama on TV. Who knew there were so many crime dramas on TV? Who knew that, on any given night you could just plop yourself down on the couch and watch hour after hour of crime drama? Don’t these murdering people get out and like go on vacation or something? (Never mind, I really don’t want to know the answer to that.) I never realized that you could watch crime drama on TV 24×7 and never run out of TV shows. HELP!

And now it has me convinced, once again, that it’s trying to kill somebody. It’s an entirely new plot-a new twist on the “I’m a TiVo and I’m going to slowly but surely drive Carol mad” epic drama that’s been playing out in my living room (now, actually, my bedroom! It’s inching closer!) It’s burying me under a mountain of murder mysteries. It’s like I’m drowning on the murdering titanic and I’m left forced to bail with a soup spoon while, everyday, theiceberg inches closer. It’s a flood of crime drama. If there’s a murder on TV, any channel at all, TiVo’s all over it. If there’s even a hint of a murder…if they like show us some dead body or even some guy in a coma (that would explain my recent fascination with House MD, actually) it goes nuts. It’s all over it. Murder here, murder there. I can quote forensics better than most of the actors on CSI . I know why you use bleach at a crime scene and I know what company makes those little blue booties they wear on their feet (over their shoes!) so they don’t get blood all over the already blood soaked carpet. Help! HELP! I tell you. HELP!

The other day, somebody came up to me and asked, since President Ford had just died, “Did you know somebody once tried to assassinate him?”

“Oh yeah,” I replied, “Squeaky Fromme. One of the Manson Family chicks. I know all about them. They were the folks who offed the scion to the Folger’s coffee clan in a house in Los Angeles, a house that was recently rented by Trent Reznor actually, and used to record a Gothic album. Yeah, she’s in prison in California, along with the other Manson Family members, after a long trial involving a Colt .45 and….” HELP! People think I’m weird. And it’s all because of TiVo. And I still have a mountain of murder left to watch. I can’t unboop it fast enough.

I mean, why else would I actually seriously consider watching “Menendez: A Murder in Beverly Hills?”