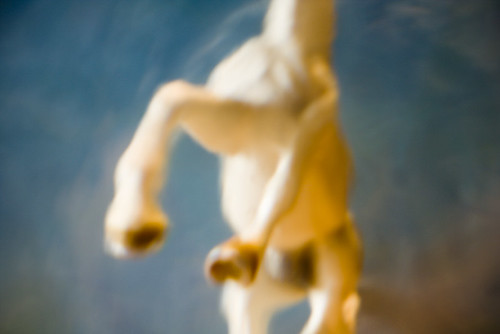 No, this isn’t about TiVo (although it could be, what with all the murder going on in my home these days.) Have you heard that new singer James Blunt? He sings a song that starts out, “you’re beautiful….” (OK, so, I know that really doesn’t narrow it down much but…) and he has an unusually high, squeaky voice. Ear shattering high is how I would describe it actually. (Take two pointed sticks. Place one in each ear. Stab profusely. Now you get the idea. What’s that you say, you’re deaf? Poked your ears out with sharp sticks? Well, you’ll thank me when you come to realize that you can now no longer listen to James Blunt.)

Now, I’m usually one of those “live and let live” kind of consumers. If I happen upon, say, a book I hate, a movie I dislike, or a song I just can’t stand, I don’t usually rant about it. (As you probably know, I’ve got plenty stockpiled up in the “rant about me” department-all raising an ugly hand and dancing around like a kid in the back row of a fourth grade class who has to skip to the bathroom and needs a hall pass.) No, I like to think that, being an artist myself, I judge fellow creative types by their best work. And, if I should happen upon something that’s, well, let’s just say, “less than Rembrandt-like,” I just sort of let it pass. Let it go. Drop it. There’s no point in stewing over mediocre artwork, the world’s too small a place for that and somebody, somewhere else will appreciate it.

At first, I kept hearing his song on the radio. OK, no biggie. Change the channel-it’s easy enough to do. Push button “2” in the car or turn the fat knob on my radio dial to the left a bit. Piece of cake.

But then, he started cropping up in odd places. He was in the supermarket, playing over the PA system. I heard him at the bank. That annoying “you’re beautiful” high pitched warble, there it was, as I was waiting in line at the Post Office. I heard the muzak version of the song in the elevator. Ugh. I had enough. I felt like I was being attacked by James Blunt. It was like some kind of Japanese water torture involving an uber-annoying male falsetto voice embodied by a super skinny British “neo-emo” singer-songwriter.

Finally, and I do mean *finally* he shut up. The “You’re Beautiful…” song went away. For a few days, there was peace and quiet in the kingdom and all was right in the world (well, OK, there was the “pesky” Iraq thing going on, but, well, you get the idea.)

Then, something happened. Just when I thought it was safe to go to the bank, the Post Office, ride the elevator again, what happens? He releases another song. Yes, it’s true, there’ a new James Blunt song out and, well, hate to say it but, it’s as bad as the first one. I think I’d rather be kicked in the head by a horse than have to listen to that song again. And you know, you just know, it’s going to be all over the place in a few weeks.

What’s next, James Blunt does Christmas carols? Oh, Santa, save me!

Until next poke in the ear with a stick…