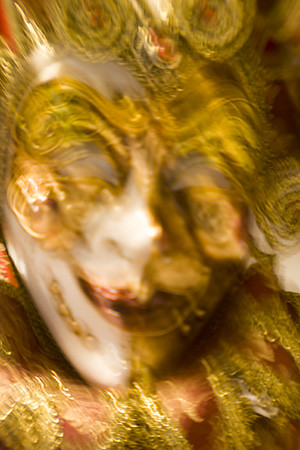 Ok, so I caved and ended up watching the Academy Awards tonight. As always, I thought I would have some fun by giving you my unfiltered view.

Early on in the show, I was reminded of an old joke about Jack Nicholson. Some comedian (David Letterman, perhaps?) once said, “these new clubs have V-I-P rooms within V-I-P rooms until, finally, you open a door and there’s Jack Nicholson sitting there in a small room by himself, wearing sunglasses while slurping down a drink.” Jack Nicholson always appeared to be in the middle of the audience and the cameras kept panning to him over and over again, while he just sat there, wearing sunglasses at night.

What was that *thing* Charlize Theron was wearing on her shoulder? She should have stuck to accessorizing with a pet chihuahua a la Paris Hilton-it would have been much sexier.

Highlights of the evening came early, with the film noir tribute and Dolly Parton singing-she was a high point in the show and it wasn’t just her push up bra.

George Clooney is annoying and has way overstayed his hardly-earned 15 minutes of fame. You’ve won your award, now go shoo.

Jon Stewart can be funny, although we know he’s Jewish, (those jokes were getting old two seconds after he kept telling them) the Bjork/Cheney joke was spot on.

Samuel L. Jackson really needs an Oscar. Why doesn’t he have one already? What’s up with that? Just how long are we going to have to run around saying things like, “Academy Award nominated actor Samuel L. Jackson…” His names too long and he’s too good of an actor to be without, so please fix this. Somebody? Anybody? (“Get my agent on the phone…”)

War of the Worlds? You mean Tom Cruise gave up couch jumping and insulting Brooke Shields long enough to put out a movie this year? Wow. Who knew? Who noticed? Who cares?

What was Jennifer Aniston even doing there? Has she ever been in a movie anybody’s actually seen? Did Brad Pitt dumping her leave her so desperate she’s resorted to doing Oscar presentations solely for the purpose of getting those free overstuffed doggie bags? Jennifer, honey, in another two weeks, you won’t even be able to get another TV gig, ok? So you’d better enjoy those free “spa days” while they last and like make the most of them, you annoying twit.

Somebody (I forgot who) almost tripped over her dress but recovered. She’s my hero, since she made a funny joke out of an uncomfortable moment and I’m a klutz just like her. It’s a wonder George Clooney didn’t trip over his own swollen ego, it was that large.

Speaking of tripping, what was with all those dresses with trains? Didn’t anybody ever tell these women you can stop at your ankles when donning black tie attire? Must your dress go one for five days past your spiked heels?

Larry McMurtry thanked son, James, and “books” which was cool, even though most folks still probably don’t recognize either literary talent.

The Oscar’s are becoming more like the Superbowl ever year. Testament to this, in the “put the TiVo remote down” department, the Coke commercials were better than most of the program, as was the totally fab commercial featuring M. Night Shyamalan for American Express. If I didn’t already have such messy hair and such a penchant for Brink’s Trucks, I’d want one of those newfangled Cadillac convertibles as well.

The Three 6 mafia was entertaining but Dolly should have won for breast, I mean, um, “best” song.

Reese Witherspoon is cute as a button and that little gold dude matched her dress. You go girl.

Jack Nicholson stunned the world in one word. We were so expecting “Brokeback” and got him to “Crash” instead.

Too bad those sunglasses didn’t break in the wreckage along with the gay cowboys.

(The entire program did make me want to see Crash, but I’ll wait until it comes out on video.)

Until next little gold man…