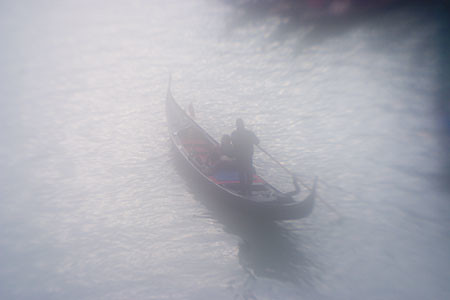 Ok, get used to it. Those damned gondolas are just so photogenic. I shot gondolas in the rain, in the snow, at night, in the daytime, in the morning, in bright light, in low light. Geesh, you would think that I’ve never seen a boat before. But, they are just so cute, aren’t they?

The gondolas are not just cute, they are quite expensive. I believe that a half hour ride runs about 80 Euros which, in the US, amounts to about $100 or something. That’s quite a lot of dough for not much row, if you ask me. You can, however, photograph them for free.

I tried out this “heavy breathing” technique in conjunction with the lensbaby-where you breath into (onto?) the lensbaby just before you take the picture. It makes it look like you are shooting in the fog, or that it’s some kind of misty morning. Somebody in my workshop, Dawn, I belive, said at one point, “the fog doesn’t go with the blue sky.” She’s so right about that but, there are times you can make the misty morning blurry lensbaby work for you, and it was worth a try. I had fun with it anyway. Even if I did feel like I was panting.

Well, I’m about 1G through my images from Italy. Still about 17G’s or so to go. I had better not go out shooting again until I really put a dent into it this time. I don’t want to be lazing about while I’ve got 18G of CF to get through.

You never know, there just might be a really good picture hidden in all those silly boats.