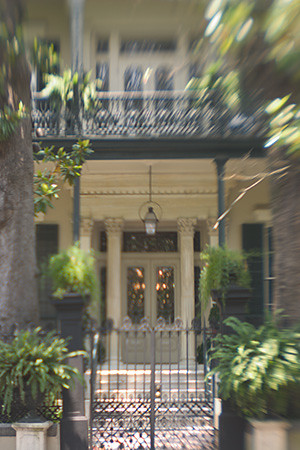 The events of the past few days have been really newsworthy. Rosa Parks, a great pioneer for underdogs everywhere, passed away, Harriet Miers has withdrawn her nomination for the Supreme Court, Hurricane Wilma has crossed southern Florida, leaving a wake of destruction in it’s path.

And, so, what do I decide to talk about today? You guessed it-none of that. Today is a special day. Today is my day. Today, you see, is my birthday. Yes, it’s horrible but true, I’m now, officially, that “age,” you know the one, that age that women always lie about and say they are when they are actually like 43 (or, gasp, even older, like, 54.) I’m 39 years old today, having been born 27-October, 1966. (Don’t believe me? Do the math yourself! BTW, I was born at 7:28 at night, eastern standard time, so like, officially, I’m 38 for another six more hours or so.)

This is Trent Reznor’s house (I think) from New Orleans. I don’t think that he lives there anymore because, well, this was shot on one of those “walking tours” through the Garden District. The lady guiding us through the tour told us that he sold it to some actor (I thought she said “Nick Cage” [of TiVo fame] but I could be wrong, she was twirling this red umbrella the entire time she was talking-very distracting for us photographers. Throughout the entire talk, I wanted to rip that umbrella from her hands, run away, and photograph it in the cemetery, like some demonic Mary Poppins.)

When I was younger, I thought that Trent Reznor was the hottest rock star that ever lived. I almost died when I heard him writhe in leather singing (no SCREAMING) “I want to f#$% you like an animal!” That was hotter than hot.

If I lived here, no, I wouldn’t opt for orgies in the den with Trent, his snake, and his leather pants, no actually, you’d have a hard time getting me away from that cemetery. This house is, you see, horribly close to the best damn cemetery in New Orleans (Lafayette.) I would have a hard time getting past that. I’d wake up in the morning, camp out on their lawn, by their gate, until they let me in to photograph. Then poor Trent would have to pry my worn, Compact Flash eating camera out from my cold hands at the end of the day. It’s probably safe to say that I would indeed shoot up the place. It’s that good for photographing.

Sorry but, even on my birthday, the leather pants would have to wait.

Now, isn’t that what you really wanted to know? Something that’s better than sex? (And, to think, all this time you didn’t think it existed.)

PS I have some tasty Kim Phung tofu for lunch and am going to settle in for an afternoon power nap to make up for all the hard work I don’t do the rest of the year either.