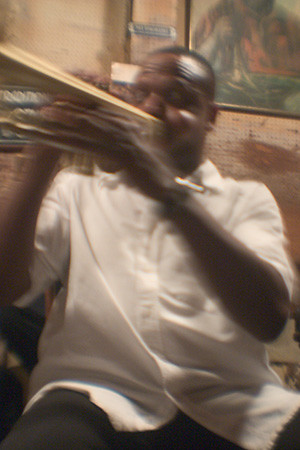 Speaking of music from New Orleans, I just heard on the radio, while coming back from lunch, about how the Nevil brothers have relocated to Austin because of the storm. Welcome to town, folks! It’s great here and the music’s really good too, I’m sure you’ll like it. Look out for the Salsa, it’s a bit spicier than what you’re used to and shy away from our gumbo because, well, even “the good stuff” just isn’t all that it’s cracked up to be.

And, speaking of lunch, I *almost* went to Bear Rock Cafe for lunch again today. It is right around the corner from where I work but, alas, I opted instead to go to Subway and try their new Bourbon Chicken sandwich. It wasn’t half bad. I think that I was so hungry, even a half bad sandwich would have tasted pretty good. It’s been busy a lot lately and I haven’t had much time to focus on “little things” like eating and sleeping. (I’m so tired, I could keel over, actually.)

On the way to lunch, I saw some friends from work sitting outside on the patio, enjoying their lunch in the shade. Yes, it’s true. Since it’s after Labor Day in Austin, it’s starting to get a bit cooler. I noticed the other day, while putting Charlie out in the evening, that, at that time of day anyway, it was only in the 60’s. Sure it was still close to the dead of night, but it was nice and cool. I wasn’t used to it and almost felt a chill rounding him back into the house.

I can’t wait until it gets a bit cooler in the daytime so I can go out shooting again. I want to go to Bartlett, Georgetown, and a few other places. I really want to go to Liberty Hill and Bertram again, since I really liked those towns too. I’m looking forward to going out shooting and, this time anyway, I’ve got some ideas in mind for what I want to do.

There’s nothing like going out shooting with a mission, even if you end up getting something totally different from what you went searching for. It’s the sense of urgency that can really drive you to get some good stuff.