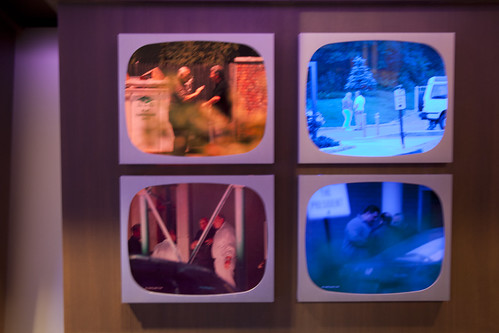 This was taken inside of the Mob Museum. It’s actual surveillance video of mobsters in action. (Well, if what they do can be called “action” that is.) I kind of liked the way they laid out the surveillance video-in these sort of 4×4 grid style small screens all around the room. Really drove the point home that the feds can watch us almost anytime they want.

I’ve still been busy and been a bit under the weather, so keeping my head down. I promise to pop back up at some point, but I did think it would be a good idea to check in and let y’all know how things are going on my end. Still getting the house together and been busy with lots of little things, not to mention it’s hot and I just don’t feel much like going out shooting in this heat. Once again, I promise, as the weather breaks, I will get out there again. More shots to follow and all, I promise. Been doing a lot of thinking about what I want to shoot, just haven’t made it out into the wilds all the much (at least not yet anyway.)

Lately, I’ve had this strong desire to just run away with some tiny or odd antique style camera. Maybe one of those newfangled Fuji cameras that shoots all square and sort of Instagram-y or maybe just run away with an old film camera, like a Brownie or a beat up old Hassy and a bucket of film. Just go somewhere, almost in hiding, shoot tons, and come back with a new book (or some other similar big project type of work.) Yeah, man, I so want to do *that* it’s not even funny. I’m getting a hankering for sinking my teeth into something big…like, really big…and I so just want to run away and do it, it’s not even funny anymore.

Then again, this would make me much like these mobsters-sticking around in hiding and only coming out to play when the weather is good or they feel like doing some “whacking” (of sorts.) Yes, that Canon dude. I’m *so* going to make him an offer he just can’t refuse. (Sorry, couldn’t help myself there, with that last one.) Heck, I even have a fedora around here somewhere, I swear I do.