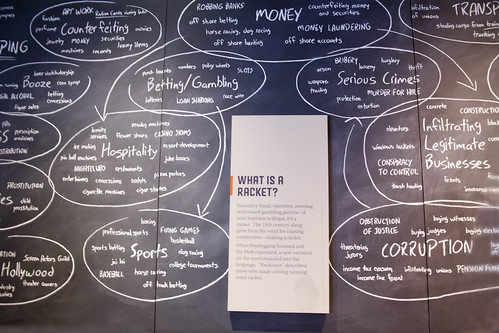 OK, now you can’t say I didn’t warn you about this one. Back when I had just returned from location in Vegas, I mentioned that I had done some shooting of words. Words, words, words, I think I called it. Inside of the Mob Museum, I shot nothing but words. Well, OK, maybe almost nothing but words, but still a lot of words anyway. Words here, words there, words everywhere. Lots and lots of words. And, I told you I’d upload them at some point, right?

The point is now. It’s time. Here are my words. Well, some of them. You’ll just have to wait for the rest. But, they’ve started coming. Here they come, I can almost see all of them now. Can you guess what words tomorrow will bring? Corruption, greed. What is a Racket? Sports. Prostitutes. Laws. Crime, money, politics, sex, scandals, garbage, Hollywood, New York, Chicago, booze, drugs, gambling. It’s all there, man. It’s all out there in Vegas. It’s all hidden in the words.

Sometimes, all you have to do is read the writing on the wall. And, why, that’s what I’ve done, when I went out to visit with that mob museum. Words, lots and lots of words. Maybe some of them will make sense, some of them won’t but they’ll all be words. Words for you to read. Writing. Walls. Lots of little words, all adding up to one big puzzle. What do these words mean to you? What did these words mean to me? Why did I shoot so many of them? Ah, life is full of little riddles, isn’t it? Lots of little riddles and more than a few words to go around, that’s why we love it so much.

Frankly, I wouldn’t have it any other way.