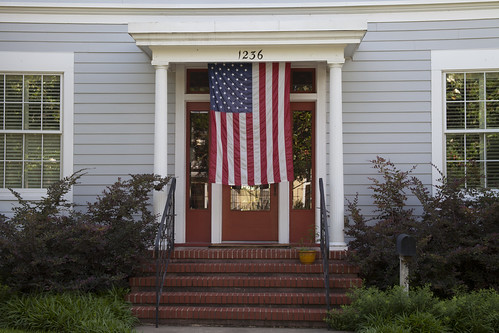 Yesterday, I was thinking how lame my flag image was. I mean, it’s an OK image, I guess, but I was thinking how I wish I’d had a better image, a much better image of a flag, to upload for Memorial Day this year. The one I posted yesterday was a grainy “poor man’s” version of a “real” flag image. Let’s just say Iwo Jima it’s not and leave it at that but, what to do, what to do? I had to post *something* in honor of Memorial Day, right? It was your basic poor man’s substitute (of sorts) but it left me wanting more. “I need a flag!” I thought as I hit the ground today.

Today, I went up to Georgetown to do a bit of shooting and I’d have to say it falls under the category of “ask and ye shall receive.” There were tons of flags on display, all different ways, all different types. They even had flags in the little “cushions” that are sort of like speed bumps-you know the little “grassy knoll” type things they plant in the middle of the roads to keep you from gunning down their nice, well-manicured back roads doing 100 miles an hour (or so.) Yeah, those little median type islands that slow you down just enough, somebody had even gone around and decorated those with little flags in honor of Memorial Day. Rock on. I mean, how cool is that? I was just thinking I wish I had a better image of a flag and they go around and plant them all over town just for me (well, OK, maybe not just for me but, like, you get the idea.)

Started playing around with the new long lens too. Took a couple of shots of Chase and he came out soft. He is soft, so I guess I should expect that. Still though, that beast (the lens I mean, not the dog, although technically I guess he is a “beast” of sorts too) has some seriously shallow depth of field. I have to get used to that again. My 100mm macro lens (especially when shot on the crop cameras) renders me depth of field-less (well, pretty much. You want a mile and it gives you about a quarter of an inch. And that, my friends, is on a good day.) Lenses feeling “generous” aside, I am going to have to get used to some seriously shallow depth of field. (Coming from the likes of me, little miss blurry soft focus girl, believe me, that’s really saying something there.)

Hey buddy, got any depth of field to spare? I’ll trade ya a flag for it? (No? Pretty please? With sugar on top?)